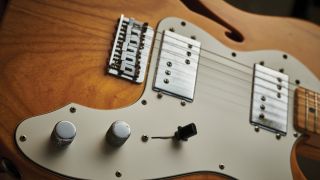 Fender released the Broadcaster/Telecaster and Esquire electric guitars in 1950, followed by their upscaled variants the Telecaster Custom and Esquire Custom in 1959.

So, from the late-'60s onwards, the company attempted to compete against its industry rivals while appealing to the rapidly changing musical and aesthetic styles of the time by releasing further Telecaster designs.

Gibson/Epiphone, Gretsch, Guild and Rickenbacker had all achieved success with their semi-/hollow-bodied thinline electrics, and the new CBS regime at Fender was keen to explore similar options. Thus, having approached ex-Rickenbacker guitar designer and builder Roger Rossmeisl about the idea as early as 1965, the company unveiled its new Coronado semi-acoustic range in January 1966.

It was a strong indicator of the Telecaster’s next destination.

With its basic slab/non-contoured body design, the humble Telecaster was the ideal candidate for experimentation and by 1967 Fender had turned its attention to creating a weight-relieved version of its faithful electric.

That year, a hollow-bodied Telecaster sporting a spruce top and top/back binding was prototyped (albeit with no f-holes), while some regular production Telecasters left the factory featuring experimental weight relief routing hidden underneath the pickguard (these rare instruments are often referred to as ‘Smuggler’s Teles’).

The classic form of the single f-hole Telecaster Thinline eventually took shape early the following year when Rossmeisl, along with his assistant, Virgilio Simoni, developed a method whereby the body, once cut to shape, is routed via the rear and the back later glued on.

The Telecaster Thinline was soon unveiled in the summer of ’68 listed at $319.50 (with an optional $57.50 case) and, although it features the same neck, pickups/ electronics and hardware as a regular ’68 Telecaster, it is much lighter than the standard model and has a springy and resonant feel.

The major difference lies in the Thinline’s body design, which initially came in a choice of two natural finishes - mahogany and ash - in order to appeal to popular sensibilities while alluding to the instrument’s ‘natural’ sonic properties.

The evolution of the Fender Telecaster Thinline

In 1971, following the arrival of Gibson PAF humbucker designer, Seth Lover, at Fender, the Thinline Telecaster was revamped with a pair of Seth’s new Cunife ‘Wide Range’ humbuckers in a similar vein to the top-of-the-range Deluxe Telecaster (appearing from 1972 to 1981). The Thinline Telecaster remained in production throughout the remainder of the 70s until its discontinuation at the end of the decade.

Guitarist would like to thank Vintage ‘n’ Rare Guitars of Bath, UK.