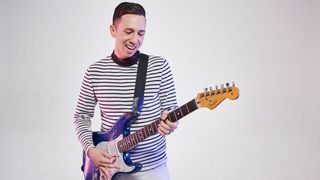 Cory was first exposed to music by his father who would constantly play records around the house. Although not a musician himself, his father was what his son described as “a total music freak... a music head”. So Cory’s formative years were played out against a soundtrack provided by players such as Hendrix, Joe Pass, Pat Metheny and Ralph Towner.

A great deal of the music he had heard courtesy of his dad was guitar driven and the young Cory was “interested in the sound, interested in what it did to me emotionally, how music made me feel”.

He became curious about rhythm playing and, through intense metronome-based practice, he gained the ability to lock in with a rhythm section with scary precision.

As well as playing with Vulfpeck and The Fearless Flyers, Cory has produced a series of solo albums, the latest of which is Live in Amsterdam. A much in-demand musician, with a relentless touring schedule, Cory might also have been spotted by the eagle-eyed in the house band on Stephen Colbert’s late night US TV chat show.

During our pre-interview chat Cory revealed that guitar wasn’t his first choice as an instrumentalist: “I actually started on bass. Bass was my first instrument...”

So, what exactly was it that persuaded you to switch from four strings to six?

“At school, two kids said they would start a band with me. One of them, his dad had a drum set at the house and the other one, his dad had a bass at the house. He was like, ‘We’re not going to be able to buy a guitar, so maybe we just do two bass guitars?’ I was like, ‘I don’t know if that’s going to work. Fine, screw it. I’m going to buy a guitar.’ I wanted to be in a band that bad.

‘I’ll abandon the bass, I’ll play guitar,’ and now I’ve just been stuck ever since. I’m still a closet bass player; I love playing the bass.”

Has playing bass influenced your sense of rhythm as a guitarist?

“I bought transcription books for Blood Sugar Sex Magik [Red Hot Chili Peppers, 1991], the bass and the guitar book, and I learnt every song front to back, on bass and guitar. What it did is it taught me how the parts weaved together, how they functioned a little bit better. When I was really getting into guitar, it was when One Hot Minute [Red Hot Chili Peppers, 1995] came out.

"Then it was learning all the guitar and bass parts for One Hot Minute. It was like, ‘Oh, interesting. The way that Dave Navarro approaches guitar is way different than John Frusciante, but they both work really well.’ Then understanding, even within a band, how different guitar players and different approaches can affect the sound. I bought the transcription book for Evil Empire, the Rage Against The Machine album.

"I was in love with Tom Morello - the sounds he was getting. I was like, ‘If I just get the book, read the tabs, read the music, I’ll be able to play those songs...’ Little did I know, there were a lot of guitar effects involved.”

How did you find out about guitar effects?

“It was like, ‘The tabs are wrong. What’s going on? How is the book wrong? I know what I’m doing is exactly what this thing is telling me to play and I’m playing along with the record.’ Then I realized, ‘Oh, my gosh - guitar pedals. There are so many sounds that you can get.’ So that was my introduction to the wah pedal. Then when I got that it was like, ‘That’s how Hendrix gets that sound. That’s how Kirk Hammett does his thing!’

"Then I just fell in love with the wah pedal. Phaser, flanger, all those things - I finally got hip to what they were and what they could do for the guitar.

“I think the order in which I learnt how to play guitar maybe informed a lot of why I play the way I do now, where it is mostly coming from the hands and the voicings and the feel and the attack. For me, it always comes down to the part and the feel and the music side of it, and then I’ll bring in effects if I absolutely need to.”

You don’t necessarily use specific brands of effects in your setup, do you?

“I’m less picky about effects, because I don’t start with the sound necessarily, like the sound of this specific pedal. It’s just like, ‘This pedal does a certain thing for the part that I’m playing.’ It’s more about the musical part, the range on the instrument, the attack, the rhythm, the size of the sound and then the effect just enhances that. So it’s been a journey on that, but it’s really fun.”

Did you start off playing a Strat or have you evolved towards it over the years?

“Well, my first ever instrument was a Mexican-made Fender Jazz Bass that I still have to this day and it’s still the bass that I use when I record a lot of my records. I love it. Guitar wise, when I had to buy a guitar to start my band, I bought a little Traveling Wilburys Gretsch guitar. It had one pickup.

"I don’t even remember where I got it, but it wouldn’t play in tune. It’s a cool guitar, but the one that I had was just not set up right.

"Eventually, I saved up all my shoveling money - I grew up in Minnesota, so we had to shovel the snow for our neighbors to get 20 bucks or whatever - and bought a blue Stratocaster. It was, ‘Dad, I need a real guitar.’ He said, ‘All right, tell you what, let’s get you a Stratocaster.’ It wasn’t like, ‘Let’s go see what they’ve got.’ It was, ‘All right, you’re ready. Let’s get you a Stratocaster. Take a look at the lineage: Jimi Hendrix, Eric Clapton, Jeff Beck, Nile Rodgers...’

You must have experimented with other types of guitar, though?

“Sure, I like playing humbucker guitars once in a while, but the Strat has just always been my sound. It’s where I feel most at home. I’m comfortable on any guitar, but the thing that I feel is most important for any musician or any artist is having an instrument that draws your voice out of you.

"So, it’s great, and I love the fact that it’s so versatile. Pretty much 90 per cent of what I do is in the fourth position, neck and middle pickup.”

“As far as amps go, I just like something that’s going to get me a really clean, fat, beefy tone and also be able to take pedals well. Any time I use drive, it’s all just from pedals; I don’t use drive from amps very much. So, in that case, I’m less picky about tube amps versus solid state, because I get the drive from the pedals.

"I like to use a compressor. Pretty much any compressor with a blend knob is going to be fine, because I can adjust it however I need and mix in a certain amount of the compressed sound and it’s great.

"I felt just as good about the tone running through two DV Mark Raw Dawgs and couple of cabs, or through two Twin Reverbs.

"Fortunately, it’s saved me a lot of money from not having to buy all that gear.”

You’re not into vintage gear, then?

“Vintage gear is great and for a while I wanted to find ‘the’ Tele and ‘the’ Strat. I went to Chicago Music Exchange and was like, ‘Let’s pretend I have an endless budget. Give me your greatest Stratocasters.’

"Or it’s, ‘There are some weird quirks about some of the notes, because it’s an old instrument.’

"The fortunate thing for me is that I’m a cheap date. All I need is a $400 Strat and whatever tube amp or whatever clean amp.”

How did you become involved with Vulfpeck and The Fearless Flyers?

“I just hit it off with those guys and we became friends; it just started as friendship. They were coming through Minneapolis a lot, a lot of them were living in LA at the time and I was doing a bunch of work in LA.

"It just started as a friendship, a mutual admiration for each other’s music and everybody has, the whole time, had side projects and stuff on going on, so it was a friendship-based thing.

"Then eventually it was like, ‘Man, we love hanging out with each other. Why don’t we play music together more, too? I love what you do, you love what I do, let’s play.’ So Jack [Stratton, multi-instrumentalist/producer/manager] asked me to join the band and it’s been really fun the past several years, just being on the journey together.”