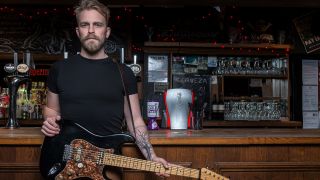 In the three short years since we last caught up with Canada’s Joey Landreth, the guitarist has released a debut solo record, Whiskey, in 2017, and a recent follow-up, last year’s Hindsight, which he has been relentlessly touring alongside his commitments to The Bros Landreth, the band he started with his brother, bassist Dave, in their hometown of Winnipeg.

In fact, he’s on the road right now on home shores in support of The Bros’ second and latest long-player, ’87. It was during the gap between the band’s two albums that Joey found time to spread his own songwriting wings.

On the recent Hindsight he joined forces with producer and multi-instrumentalist Roman Clarke, with his brother contributing to some of the writing duties, too. Listening to Hindsight again, our ears settle upon the deep growl of Joey’s drop-tuned guitar. “My main guitar, the goldtop, is tuned down to open C,” he tells us, “so not quite the full B that a baritone is, but I live in that tuning, CGCEGC. I use 19 to 65 gauge strings.

Originally the set that I started with was 14 to 68, but the 14 was way too light. I just started working my way up. I’ve always liked heavy strings, so in standard tuning, for example, I use 13s. So the 19s are around that kind of weight.”

And so, with the essential ‘What strings do you use?’ question out of the way, it was time to dig a little deeper...

What exactly drew you to the instrument in the first place?

“I’ve always been in love with music, but the guitar started when I was eight... My dad built me a Telecaster[-style guitar]. I’d banged around on the piano for a few years before that, taking lessons. I was listening to everything from Celine Dion to NOFX punk rock. It was before I knew that you were supposed to pick a side musically, so I just would listen to whatever captivated me.

"There were guitar players in there, definitely. Stevie Ray Vaughan and Robben Ford were my biggest influences and musical mentors from afar. But then, like I say, there was a lot of pop music there. There was my parents’ record collection, which I’ve always found fascinating, too: Little Feat, Ry Cooder, Bonnie Raitt, things that also had a lot of guitar playing in it. My dad loved jazz, so we listened to a lot of straight-ahead jazz as well.”

With you listening to Ry Cooder, Little Feat and Bonnie Raitt, was there a slide influence there right from the beginning?

“No, not really. I wasn’t entirely aware of slide playing in and around that music. It wasn’t until I was in my 20s that I really started to take a fascination in slide guitar. I mean, my dad was a massive slide fan, so I kind of shied away from it for whatever reason. It’s like, ‘My dad is really into that. I’m going to do something different...’”

So, what was it that finally pulled the trigger for you where slide is concerned?

“Like I said, there were a lot of slide players in my life growing up. Sonny Landreth coincidently was another big slide player in the house, and I really, really loved his playing, but I always thought, ‘While he exists and we share the same last name, I really have no right to pick up the slide when somebody as monstrous as him is around.’ But it was being a big fan of his.

"Then the first time I heard Derek Trucks was like, ‘Oh, shit. That is really inspiring.’ So I started trying to impersonate Derek Trucks and Sonny Landreth. Then throw some Bonnie Raitt and Ry Cooder in there - and what you got is what you get.”

Did you play in bands at school?

"You idolize your parents, so other kids want to be cops or firefighters or whatever, and I wanted to be a keyboard player in a band.”

Did having a musical brother help somewhere along the line, too?

“Yes, although we didn’t really connect musically until we were in our teens. He played, and my brother actually lived kind of in the classical world early on. He’s a classically trained flautist. We were both very musical, but our paths didn’t cross until in our teens when he picked up a bass - and then the rest is history there. We formed the band when I was 24, and Dave would have been 26.”

Does your approach to songwriting change when you’re preparing your solo material, as opposed to writing for the band?

“It’s not all that much different. My brother is obviously not there, so that’s the biggest difference. But musically, it’s kind of an extension of that in terms of the projects. It’s not altogether different. There’s a little more guitar playing, a little more self-indulgent guitar stuff, but not all that much more. It’s not a massive departure. The emphasis is still heavily on the songs, on trying to be as musical as we can.

"There are a lot of harmonies, much like The Bros - it’s more of an extension than a departure. “I actually did wind up doing a lot of writing with my brother for the last record, [Hindsight], alongside Roman Clarke, who’s the producer. Part of the project was I wanted that record to be in collaboration with Roman, so we wrote everything together except for the first song, which is Forgiveness. That’s just my tune. But everything else, he and I wrote together.

"In the case of Forgiveness, I brought that song to the table and said, ‘What do you think it needs?’ Roman went, ‘I think that’s done. Anything that I’d want to add to it would be on the production side, so let’s call that finished.’ That was the writing process.”

Where does the songwriting process begin for you?

“I always start with chordal ideas first. I’m a harmony nerd, so I like to build the chord progressions and a simple idea of what the melody may be. Then I start adding lyrics once I get a feel for where the song wants to go harmonically and musically.”

What sort of gear have you been taking out on the road with you?

“I’ve got my Sorokin Goldtop, which is my number one these days. I also have a Mulecaster, which is made by Mule Resophonic Guitars. It’s Tele-shaped, and it has got palm benders on it, which I use for Forgiveness. I’m currently using a Two-Rock Bloomfield Drive as well as my tried and true 1965 Deluxe - no reverb on the Deluxe.

"I also cart around a Victoria Reverberammo, which is a smaller version of their Reverberato unit, which is a harmonic tremolo and reverb, all-analog, all-tube. Then a pedalboard full of goodies.”

Tell us more about those goodies...

“It starts with a late 60s Vox wah, which is phenomenal. Then I’m using my fuzz pedal that I collaborated on with Zach [Broyles] from Mythos Pedals, which is called the High Road Fuzz. That’s first in line.

"Then it goes into Zach’s Argo [Octave Fuzz], which a kind of COB clone with a few tweaks to it: an Octavia with a clean octave blend or with a clean boost blend. Then that goes into the Mythos Mjolnir, a Klon-style thing, which then goes into the Jackson Audio Broken Arrow, which is their fantastic new drive that I’m absolutely in love with.

"Three Chase Bliss Audio pedals: Tonal Recall [delay], Thermae [delay/pitch shifter] and the Dark World, their reverb. Actually, before that is a pedal called a Count To Five, which is made by Montreal Assembly, a Canadian company. It’s kind of a mini looper - it does all kinds of weird, crazy ambient stuff, which I use for creating textures in solo pieces and stuff like that.

"Then I have a TC Electronic Flashback Mini [delay], which I use to generate a pre-delay, so I have it set 100 per cent wet to a specific millisecond pre-delay to also simulate some sounds from the last record. Then I use TheGigRig Wetter Box to blend all that madness back in with the regular sound. I’m also running those two amps in wet/dry.”

How are the amps configured?

“The Two-Rock Bloomfield is effectively dry; although I do run the reverb on the amp, it sees none of the effects. Then the Deluxe sees the same thing the Two-Rock sees but with the effects added in, so it just creates some stereo gorgeousness.

"Then the Reverberammo only goes into the Deluxe, so I use the reverb from the Reverberammo into the Deluxe, because the Deluxe doesn’t have reverb, then the tremolo, because it’s based around phase shifting - the early 60s [Fender] ‘Brownface’ was based on the phase shifting of the treble and bass... something, something, something. I’m not actually an engineer, so I don’t have anything for you on that!

"When it’s only on one amp, it creates a perceived Doppler effect, not unlike a Leslie kind of thing. But I’m kind of addicted to stereo effects these days.”