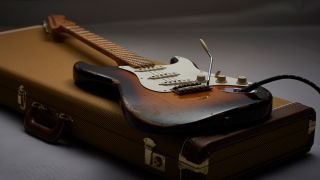 If you've got a hankering to play the blues, but don't know where to start with the gear, we have the best blues guitar gear guide around.

We've got the best electric guitars, and the best acoustic guitars, too. There are a heap of amplifier options to cater for all budgets, and – last but not least – a cornucopia of pedalboard options to give your tone that little extra hot sauce.

While just about any Gibson Les Paul will come in handy for nailing thicker and meatier blues tones, this Goldtop oozes some extra vintage class and flair. And compared to the typical humbuckers found on most other models, the P90s are better suited to warmer and rounder sounds.

That unmistakably glassy and chimey sound of a Strat has been integral to many a great blues recording. Finished in 3-Color Sunburst, Shell Pink or Olympic White [pictured above] and complemented by a period-correct mint green scratchplate, the American Original guitars are worthy of the guitar giant’s game-changing legacy.

Many of the early greats – from Chuck Berry to BB King – favoured Gibson semi-hollowbody guitars, which carried a more natural, open and airy resonance compared to the sharper attack given by solid-bodied instruments. Then, of course, there’s the fact they simply look cooler than virtually any other guitar out there.

With more of a mid-range snarl in direct comparison to the scooped output of a Strat, the Fender Telecaster has been wielded by all sorts of players from Muddy Waters and Jimmy Page to Prince and Joanne Shaw Taylor. The Player Series from the Ensenada factory brings a lot on a budget.

While a lot of Taylor acoustics feature Sitka Spruce tops, which are usually brighter sounding, this model pairs a warmer Tropical Mahogany top with Tasmanian Blackwood for the back and sides. The result is a high-quality acoustic with an airy mellowness perfectly suited to folky blues.

With a gorgeous distressed satin finish and plenty of warmth from the all-mahogany body, here’s an acoustic that looks every bit as vintage as it sounds. Instead of a scooped EQ curve like more modern acoustics, the StreetMaster thrives and drives on mids, ideal for the blues hounds among us...

When it comes down to touch dynamics and sensitivity to bring out all the nuances in your playing, few amps will be able to compete with the response of a valve-powered Fender combo. This hand-wired Fender ’57 Custom might be on the expensive side, but tonally it’s in a class of its own.

Allegedly created so that Eric Clapton could fit his amp into the boot of his car, the first ever Marshall combo was affectionately named after the band it was most associated with. It soon became one of the most popular amps of its era and this hand-wired modern reissue recreates those timeless Beano album tones with minimal fuss.

Designed with some expertise from one of the most respected players to ever pick up the instrument, Guthrie Govan, this updated version of The Countess offers two channels, each with a crunch mode as well as a switch to take you back to the original V30. If you want boutique looks and tones without the boutique pricetag, look no further...

With its built-in effects and five unique amp characters, this modelling amp from Boss can cover a whole lot more than blues. But given the quality of its less overdriven and cleaner modes, which are often where amps of this ilk fall flat, it definitely tops the list of budget options.

Stevie Ray Vaughan is probably responsible for more Tube Screamer sales than any other guitar player to ever walk the earth. And rightly so – by boosting the mids and adding overdrive into highly compressed and cranked Fender combos, he created some of the greatest guitar tones in music history.

Smoother and more transparent than a Tube Screamer, the Blues Driver is more suited to players who want a boost in signal and overdrive without affecting their overall amp tone. This special edition Waza Craft version offers all the classic sounds as well as new options through its Custom mode.

One of the first pedals of its kind, the original Fuzz Face was famously utilised by early rock pioneers like Jimi Hendrix and David Gilmour. The secret behind its rich, creamy fuzz was the Germanium PNP transistor – which, we’re pleased to report, is still found on the models produced today.

There are many variations of Jim Dunlop’s legendary Cry Baby wah, from mini versions to signature editions with on-board distortion and frequency dials, but the basic GCB95 version – first manufactured in 1965 – remains a firm favourite to this day. Wah sounds don’t come much more classic than this.

If you’re looking to recreate that throbbing modulation conjured by Jimi Hendrix on Machine Gun, or by Robin Trower on early hit Bridge Of Sighs, you’re going to need a good vibe pedal. This update of the Vibe Machine by Croatian specialists Drybell is pretty much the best of its kind, with even more modes and functionality bundled into a tiny package.

If you’re after clean blues tones and don’t have the luxury of a hand-wired Fender-style amp, a compressor pedal may very well end up becoming your best friend. This mid-priced unit made Robert Keeley – a world-renowned effects tweaker and builder – is undoubtedly one of the best on the market.

While it’s great for an extra push for leads and solos, the EP Booster is even better at being an ‘always-on’ pedal to ramp up richness and articulation no matter what you’re plugged into. It’s voiced after the pre-amp in Echoplex EP-3 tape delay once favoured by players as esteemed as Neil Young, Brian May and EVH.

Much like the Boss Katana amps, the Line 6 Helix series stretches far beyond your basic blues crunch yet doesn’t lose sight of those vintage overdriven sounds in its quest across the tonal spectrum. What you get is an entire rig in one relatively small floor unit, modelling all kinds of classic amps and effects.

If you’re going to pick up a slide, it might as well be the one used by the man generally considered to the best in the world. The closed weighted end of this medicine bottle-style slide ensures a slick and balanced playability.

A capo can turn your acoustic or electric into a whole new instrument. Since launching in 2004, G7th have been behind some of the most popular models and the new Performance 3 version offers their Adaptive Radius Technology as well as a Unique Tension Control system.

Anyone prone to playing a bit of guitar in the kitchen or garage will undoubtedly want one of these Fender stools to rest on as they do it. The only question is whether to go for the classic logo or Custom Shop version. Or perhaps both.

Since launching their first headphone range in 2010, the Marshall logo has been seen almost everywhere and on everyone – from guitar nerds to just about anyone that wants to enjoy music on the move. The Major III offers crystal clarity and great value for money, costing only half the price of its Bluetooth-enabled bigger brother.