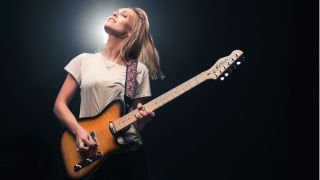 In today's maddening world of information overload, we could all do with a little help to discover tomorrow's guitar masters. And from Icelandic metallers Une Misère to Norwegian virtuoso Tora Dahle Aagård, the six-string world has never looked so promising.

Here, we've compiled a list of six refreshing guitar artists you need to hear this month, and we'll be doing so every month from now on. Enjoy!

Though they would very much appear to be a supergroup made out of various members of Hertfordshire’s ever-thriving metal and punk scenes, there’s a lot more to Gold Key than meets the eye.

The atmospheric rock quartet’s first album, Hello Phantom, was easily one of the best British debuts of 2017 and they’ve been wasting no time in putting the finishing touches to its follow-up.

“For us, getting together felt like a return to innocence,” says guitarist Laurent 'Lags' Barnard [Gallows], who is joined by singer/ guitarist Steve Sears, SikTh, bassist James Leach and drummer Jack Kenny.

“There’s a lot of music we heard growing up sliding its way into our sound – Pink Floyd, The Beatles, and, thanks to my mother, Abba. We were taking ideas from a palette of Gilmours and Lennons, but then mixing it with the dynamics and ferocity we acquired in our time playing heavier music.”

Naturally, exploring more progressive and avant-garde sounds in his latest venture has called for a different sort of philosophy when it comes to his six-string approach. Perhaps most evidently of all in his pedalboard...

“With Gallows, it’s all about guitar into amp, playing loud and hard, sounding raw as hell,” continues Lags, who recently switched from Orange to Victory amps for both bands. “I had to forget all that for Gold Key and pretty much depend on my pedalboard for everything.”

Thankfully, the Boss MS-3 switcher is there to control it all from one place, the guitarist joking he’d be dancing in ways no-one needs to see without it.

“I also use a DD-500 and a RV-500 for my delays and reverbs respectively, for soft shimmers or swirling repeats. A lot of people buy pedals and then forget about the updates, so my tip is get the updates - they’re 100% worth it!”

"The Reykjavik metal scene is thriving, we have all sorts of heavy music from black metal to hardcore,” says Gunnar Ingi Jones, guitarist of Icelandic metallers Une Misère.

Having signed to Nuclear Blast at the beginning of 2019 for the release of their devastatingly heavy debut album, Sermon, the quintet have been melting minds on their recent headline European tour – and feel their Icelandic roots play a massive part in that potent noise.

Though their music hits hard in its quest for all-consuming metallic heaviness, the members feel there’s definitely a sense of optimism behind it all. Hope remains one of the core values at the heart of their deceptively bleak wall of noise.

“It’s very important to spread the message of positivity through heavy music,” says Gunnar. “No wound can cut you deep enough for you not to heal.”

"I don’t think I am a typical guitar player,” says Tora Dahle Aagård, singer and guitarist of Oslo-based band Tora. “I don’t really listen to a lot of ‘guitar music’, though if I do, it will be players like John Mayer, Derek Trucks or John Scofield – those who know how to improvise and make their instrument talk.”

Having released her debut album last year after amassing a strong following on Instagram, sharing the stage with the likes of Paul Gilbert and even playing London’s Royal Albert Hall as part of The Norwegian Blues Adventure back in November, the New Year will be involve a lot of new music but the same old guitar...

“I’ve had Vintage Thomas Blug signature Stratocaster for years and it’s the guitar I always come back to” explains Tora. “I’ll be releasing my second album with the band in Spring. I can’t wait!”

Once of Hang the Bastards, Joseph Nally and Angus Neyra are now taking their sound in a more retro direction, cooking up a gooey fuzz stew of doom, thrash and classic rock riffs.

Orlando’s rising star of lapsteel blues and winner of the Albert King Guitarist of the Year in 2013, Birchwood is the real deal. Some have likened him to the ultimate showman, Buddy Guy, but let's leave the effervescent Birchwood to put his own spin on the blues. He's the type of player to take the traditional delta style and make it into something new.

Guitarist Tom Pallet and his Watford punk renegades have constructed an almighty  sound by applying the magic formula of cranked amps and fast and easy hooks. Tune in for jangly, infectious Brit-rock, pitched on the right side of anthemic.