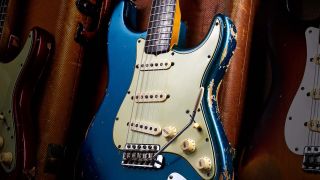 Today, we have more information than ever about the vast topic of vintage Fender finishes. However, the line where science meets art can often get blurry, so the subject remains full of conflicting facts and opinions from the top down.

Manufacturing techniques and materials have chopped, changed and evolved over time, along with the personal touches of those who were working in the factory, and it seems there have always been exceptions to the ‘rules.'

Consequently, over the years, much confusion has arisen with regards to the dark art of guitar finishing, despite some well-established truths. Here we aim to furnish you with a good handful of that demystifying knowledge…

Traditionally applied to ash-bodied Fender guitars, blonde was the standard transparent finish on Fender’s first solidbody electric models released in 1950, the Esquire and Broadcaster (renamed the ‘Telecaster’ in 1951).

In the post-war period, blonde was a popular choice of furniture finish, and in the early days before a spray technique was developed, Fender used furniture lacquers from McFadden and Sherwin-Williams and applied them by hand.

Known as ‘Blackguards’ on account of their black pickguards, these instruments often yellowed over time to a butterscotch hue. In 1954, white pickguards became standard on Teles and Fender began using DuPont Duco (nitrocellulose) automotive lacquer routinely.

These later blonde finishes are more UV-resistant and generally appear lighter than aged ‘butterscotch’ Blackguard Teles. The transparency of blonde finishes can vary considerably, and in extreme cases they are sometimes mistaken for the opaque Olympic White custom color. It remained a standard finish on Teles until 1981.

The Stratocaster was the first Fender guitar to receive a sunburst finish as standard upon its release in 1954. This original two-tone nitrocellulose lacquer sunburst consists of an outer layer of Dark Salem brown graduating into Canary Yellow.

Consequently, many of these instruments appear to have a two-tone sunburst. In 1960, a more UV-resistant red lacquer was utilized, and by 1961, the deep brown outer layer was darkened to near-black, creating a much bolder appearance.

In 1964, Fender began spraying the bodies yellow in addition to using a yellow dipdye, creating a more opaque effect. These vibrant, contrasting three-tone finishes are sometimes referred to as ‘target’ sunbursts. Throughout these changes, sunbursts were applied by hand and, therefore, naturally vary in appearance.

Throughout the 50s, Fender occasionally obliged customer requests for unusual finishes and, in 1957, its catalogue officially offered custom colors for Stratocasters, Telecasters and Esquires “at an additional five percent cost.”

Both finishes were topped with a nitrocellulose clearcoat.

Throughout the 1960s, several shades were replaced, beginning in 1963 when the über-rare Shell Pink was replaced by Candy Apple Red Metallic. By the mid-70s, however, a broader range of stock finishes temporarily supplanted the concept of custom colors itself.

Later Fender poly finishes (meaning polyester or polyurethane) are much harder wearing and more production-friendly than the nitrocellulose and acrylic materials that were mainly used up until 1968.

In the early 70s, Fender proclaimed that its “thick-skin, high-gloss finishes provide Fender instruments with an outer beauty that is both durable and attractive." Such was the company’s confidence and enthusiasm for poly that it even had the term ‘thick-skin’ federally trademarked.

Despite the inferior rep of these finishes, countless players managed to change the course of music history perfectly well with a poly-finish guitar, including Jimi Hendrix.

These days, many of us can appreciate the silky, driftwood-like feel of a decades-old nitro neck that’s been worn matt smooth by countless hours of playing, but back in the pre-vintage/pre-relic era of the late 60s, trying to keep the ever-more numerous customers happy with hardier, more roadworthy music gear was the order of the day (lighter fluid notwithstanding).