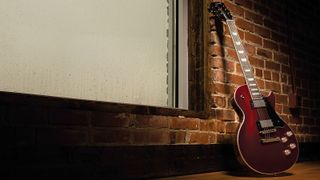 The 125-year history of Gibson is one studded with more than its fair share of celebrated moments, from the origin story of Orville Gibson building mandolins in his Kalamazoo, Michigan, workshop in 1894, to the 'golden era' under company president Ted McCarty in the mid 20th century, to a central role in the creation of any number of feted designs, from the Les Paul and the Flying V electric guitars to P-90 and PAF pickups.

Which means it’s no slight praise to state that what has transpired inside Gibson over the past year or so will likely go down as yet another landmark phase in the company’s legend.

Under the leadership of new CEO and president James 'JC' Curleigh, Gibson in 2019 unveiled what is arguably its most impressive line in recent history, bringing to market a collection that boasts a combination of classic designs (true '50s and '60s-spec Les Pauls and SGs, among many others) innovative, excessively playable modern guitars and stunning Custom Shop creations and signature models.

It is “a vision that we articulated at NAMM at the beginning of the year,” Curleigh says. “But now it has actually materialized in front of us, which is an amazing thing.”

What makes it all the more amazing is that, as recently as last year, most people would have assumed it to be an impossible thing.

The particulars of Gibson’s troubles over the past few years have been well documented - product missteps (robot tuners, anyone?), overblown price points, shoddy customer and artist relations (Gibson didn’t even bother to show up to NAMM in 2018) and, perhaps most significantly, poor decision-making on the part of former CEO Henry Juszkiewicz, who, in an effort to rebrand Gibson as a 'music lifestyle' company, borrowed millions to acquire Philips’ consumer electronics business in 2014, a move that ultimately failed. The result was that, in May 2018, Gibson filed for bankruptcy protection.

And yet, by the end of last year, a new team headed by Curleigh and new Chief Merchant Officer Cesar Gueikian had been installed, new investors were onboard and Gibson was primed to make a comeback. After a massively successful Winter NAMM - at which artists ranging from Billy Gibbons, Peter Frampton and Nancy Wilson to Robby Krieger, Rick Nielsen and Jared James Nichols came out to testify, both with their voices and fingers, in support of the new Gibson era - the company unveiled its 2019 line of instruments.

All in all, a quick year of work. “We declared bankruptcy May 1, 2018,” Curleigh says, “and on April 29, 2019, we launched the absolute most compelling new collection from Gibson that anyone has seen in a long time. Forgive my words, but that’s pretty impressive.” He laughs. “And if it’s not impressive, it’s at least aggressive.”

What is most impressive in all of this, of course, is the guitars themselves - in particular the thoughtfulness of design and quality of execution evident in the new models. Whereas in recent years nomenclature was often jumbled, vintage and modern components were sometimes mixed and matched seemingly haphazardly and everything felt excessively priced, the 2019 line is streamlined, accessible and incredibly appealing. At its core are three collections - the Original, the Modern and the Custom.

Of the first one, explains CMO Gueikian, “The Original Collection is all about looking back at the golden era of Gibson - and maybe even further back to when Orville started making instruments - and understanding, 'What is Gibson’s DNA? What is at the heart of our craftsmanship, our quality, our obsession with sound?' We are looking at the initiatives that were launched under Ted McCarty and really paying tribute to that period.”

In practice, this means a return to the glorious instruments of the golden era, as realized in new guitars like the Les Paul Standard ’50s and ’60s models, the SG 61 Standard with factory stop-tail, Maestro and Sideways vibrolas, TV Yellow Les Paul Specials and Tobacco Burst Les Paul Juniors, and all manner of vintage-appointed Flying V’s, Explorers, ES-335s and others.

“We brought all those classics back,” Gueikian says. “That was something that a lot of our fan base, our artist base, even our own people here, were desperately crying out for.”

Of course, those models became classics in the first place due to Gibson’s innovative spirit in the mid 20th century. And that spirit lives on in the Modern Collection, which, Gueikian says, “is about taking all of those learnings and then leaning into the future.”

Models like the Les Paul and SG Modern, as well as the new ES-235, meld classic designs to current features like weight-relief bodies, push-pull systems to switch between humbucker and single-coil sounds, slim-taper necks with asymmetrical profiles, shaved heels for upper-fret access and other appointments often preferred by today’s players.

“We recognize that we can’t just stay in that golden era of the '50s and '60s, and that there’s a certain player out there that wants a modern spec,” Curleigh says.

“So we said, ‘Let’s make a true modern-spec guitar, and do it through a Gibson lens, rather than a novelty lens.’”

The third component of the 2019 line, the Custom Collection, presents gorgeous, top-of-the-line Historic and Modern guitars created out of the Custom Shop, as exemplified by this year’s centerpiece model, the 60th Anniversary 1959 Les Paul Standard - Gibson’s most accurate recreation of the iconic 'holy grail' guitar to date.

“We scanned, we blueprinted, we referenced the guitar against everything we had,” Gueikian says. “We looked at every single level of detail. And that’s what’s the Historic guitars are about - being obsessed with accuracy and paying tribute to our past by making the best instruments the company has ever made.”

A 60th Anniversary 1959 Les Paul Standard doesn’t come cheap, but it goes without saying there are plenty of great guitars to be found in Gibson’s new line that won’t bust the bank account.

Nowhere is this more evident than in the 2019 Epiphone collection, which shows the historic brand - one whose origins stretch further back, in fact, than Gibson’s - undergoing its own rejuvenation.

“I think there’s a common misconception that Epiphones are just cheaper Gibsons,” Gueikian says. “But so many icons played Epiphones - The Beatles, Keith Richards, Bob Dylan… So I see Epiphone as its own standalone, amazing company with its own heritage and brand, and that’s a story we’re going to tell.”

“We’re focusing on what brought Epiphone to the dance in terms of original models and original concepts,” adds Epiphone product manager Aljon Go. “And in the process we’re working with legendary and newer artists to create guitars that are for players at every stage, from the coffee shop to the arena.”

To that end, Go points to two signature artists - fresh-faced bluesman Jared James Nichols, who collaborated with Epiphone on his new single-pickup 'Old Glory' Les Paul Custom, and Def Leppard guitarist Vivian Campbell, who paired with the company to recreate his 'Holy Diver' Les Paul Deluxe, the modified guitar he used to record the classic 1983 Dio album of the same name.

“On the one hand you have an up-and-coming player, and on the other, a guitarist who was just inducted into the Rock and Roll Hall of Fame,” Go says. “And in both cases we worked to create high-quality, pro-level instruments that were right for each of them and also super-accessible to the Epiphone fan.”

“We asked, ‘How can we tap into the next generation of acoustic players who covet a Gibson?’ By offering a premium product with more accessibility,” Curleigh says - as well as a rejuvenated push with another legendary name under the Gibson umbrella, Kramer.

“Kramer was such an iconic brand in the '80s, but it kind of got lost in the shuffle in the last 10 or 20 years,” Curleigh explains. “But for NAMM, we showed up with a few new Kramer guitars that referenced that era, and people loved them. So we’re going to acknowledge that legacy going forward, with original '80s-era and modern designs.”

Gueikian adds: “If you’re a shredder, you should be playing Kramer.”

At the end of the day, there’s clear intention and purpose in the new guitars being created at Gibson and the company’s related brands, underscored by a commitment to history and legacy, as well as to the innovative spirit that helped to forge that history in the first place.

“We’re leveraging our iconic past in order to make the best-playing and best-sounding guitars today,” Gueikian says.

“We’re not interested in just going back and recreating guitars from the '50s and '60s,” Curleigh reveals. Rather, he continues, “those guitars are our foundation - that’s who we are. And you can see that in our Original Collection. And then with our Modern Collection you can also see where we’re heading in the future. So at Gibson we’re celebrating our foundation, and we’re also building on that foundation so that it’s stronger than it’s ever been.”