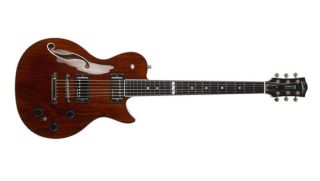 Godin Guitars has announced the release of the Summit Classic A/E Havana Burst, which will be unveiled in January at Winter NAMM in Anaheim, California. According to the company, the new model will kick off Godin’s “latest evolution of modern playability and style for what is to be expected from their 2019 electrics.”

Features on the Summit A/E include a chambered mahogany body, swamp ash top, mahogany neck, Richlite fingerboard and a 25.5” scale length. There’s also a pair of Seymour Duncan humbuckers and an L.R. Baggs T-Bridge, which enables the chambered Summit A/E to provide acoustic tones at the switch of a button.

Other features on the Summit A/E include a single f-hole on the body and Godin’s new Havana Burst High-Gloss finish.

The Summit Classic A/E Havana Burst will be offered at a street price of $2,625.

For more information, head over to Godin Guitars.