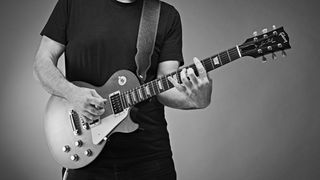 “Can you give me some examples of songs with powerchords?”

Sure! Powerchords can be heard everywhere so there are virtually limitless tracks to check out. For a classic option, listen to the verse in Black Sabbath’s Paranoid which features Tony Iommi’s palm-muted powerchords.

The verses in Queens Of The Stone Age’s Go With The Flow also stay on powerchords. Following an intro of ambient arpeggios and melodic riffs Tool’s 7empest settles into powerchord grooves at 1:46. Slipknot’s Unsainted is way down in drop B tuning but the pre-verse and verse riffs are still powerchord-based.

“How do you play powerchords?”

There are a handful of shapes to learn and these alone will cover thousands of powechord-based songs. Take a look at the examples below where we’ve outlined four shapes for you.

The lowest note is on the sixth string here. If you prefer, hold down both the fourth and fifth strings with your third finger.

This shape is the same as the first one. All you have to do is move it so the lowest note’s on the fifth string.

With the root note on the fourth string you’ll need to stretch a bit here.

Again, there’s a bit of a stretch to play this shape. Tackle it by laying your fourth finger across both treble strings.

“The last two shapes are a bit harder.”

If you’re struggling with a stretch, try practicing higher up the neck where the frets are closer together. Gradually move lower down to improve your stretch. It’s also worth knowing that you don’t have to play every note. Try playing just the lowest two notes of each shape. Or just the highest two. It won’t sound as heavy as the full three-note shapes, but the history of rock is littered with two-note powerchords.

“Got it! Shall we play some music?”

Yes! Take a look at our first tab example below where we’ve used two-note powerchords in the open position. It should be fairly easy to play.

“It’s pretty easy, but these aren’t the same shapes we just looked at.”

That’s because they’re down in open position. That just means the root notes are played on open strings. Take a look at the B5 shape - it’s a powerchord with its root note on the fifth string. A5 is the same, just two frets lower.

The second tab example includes full three-note powerchord shapes. Keep an eye out for the root notes - they’ll help guide you as you change position.

In bar 1, the root notes are open strings, which makes these powerchords easy! Bar 2 ends palm-muted; use the side of your pick hand to deaden the strings.