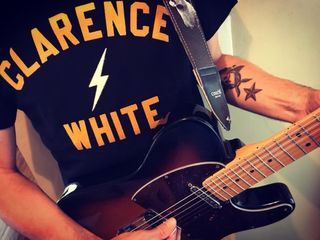 A painter often uses many strokes to paint a single seemingly simple line.

When I construct a solo, I use the same concept. I don't worry about playing it all in one shot. I only worry that the final complete solo has what I'm looking to convey.

Is it melodic? That's my first priority. If it's not melodic, it probably won't have something to build on, and I need that foundation.

Is it interesting? I like ear candy. I also like daredevils. Can I add some taste, some flash, some kind of quirk to build on the melodic nature? Is it rhythmically creative? There are only 12 notes but an infinite number of rhythms. Have I utilized enough rhythmic changes and breaths to keep it interesting, not only for the listener but for me?

Finally, how do I end this solo? How do I let this moment land? Do I crescendo and end on a high note or bring it back home to rest?

All these questions get answered by us individually when we solo—if we're thinking and caring. Some players are capable of doing all this in one shot. Sometimes I get lucky, inspiration takes my hands and I'm "One Take Zabrocki." But most times it's perspiration—trial and error and tons of cross fading. I usually set up five to six tracks and have at it. Start with something melodic, a foundation, and simply build a solo on that.

Of course, I choose the guitar, amp or modeler, etc., that best fits the song. But even more important, I choose the guitar and sound that inspires something in me. I really need to love the sound and the feel of the instrument first or my playing and creativity will suffer.

Anyway, I hope this helps you in some small way. Don't feel bad if you can't solo in the studio in one take. Most people can't. It's the finished product that counts.

Watch the video and see a solo that exists on various tracks and how much I crossfade to create a seemless statement. Eventually I'll learn the whole thing and be able to play it live. But for now I'll just let it go and move on to the next. This short solo probably took an hour to construct.

I’m a session guitarist from New York, now living in Connecticut. I started playing at age 6, sight reading right off the bat. That’s how I was taught, so I just believed everyone started that way! I could pretty much sight read anything within a few years, and that aided me in becoming a session guy later in life. I took lessons from anyone I could and was fortunate enough to have some wonderful instructors, including John Scofield, Joe Pass and Alan DeMausse. I’ve played many jingle sessions, and even now I not only play them but have written a few. I’ve “ghosted” for a few people that shall remain nameless, but they get the credit and I got the money! I’ve played sessions in every style, from pop to jazz.