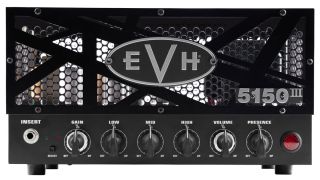 EVH has announced the 5150III 15W LBX-S Head, the third iteration in its series of lunchbox guitar amp heads.

The LBX-S combines features from both the LBXI and LBXII in that it teams the 5150III’s Green ‘clean’ channel with the Red ‘full burn’ channel, promising tones spanning blues to metal.

There are dual-concentric gain and volume controls to adjust each channel, as well as shared EQ, presence and resonance controls.

Finally, in a move that may well have been inspired by PRS’s MT 15, the LBX-S’s stealthy cage comes with internal LED backlighting that switches from green to red depending on the channel selected.