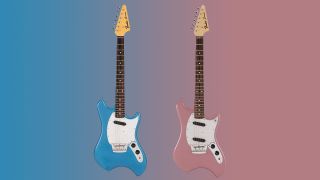 The Fender Swinger is something of the Bigfoot of electric guitars – long talked about and pretty much never seen in person.

The one-pickup, short-scale budget model, produced for a short time in 1969 out of surplus inventory parts from the Fender Bass V and Musicmaster, disappeared almost immediately and was never promoted in Fender literature (though it has been used by artists like Ben Kweller and the Talking Heads’ Tina Weymouth).

Well, Fender completists, get ready: according to a post on Fender Japan’s Twitter feed, the company is reissuing the fabled Swinger model in a new limited run, just in time for its 50th anniversary.

In addition to the original oddball body and headstock shape, the new Swinger boasts a 22-fret short-scale neck with a rosewood fretboard and a three-saddle hardtail bridge.

The new model also adds in a second single coil pickup at the bridge, controlled by one volume and one tone knob and a metal-tipped three-way switch.

For more information, keep your eye on Fender.