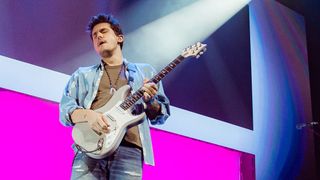 As the weeks at home continue to pile up, it's safe to say we're all looking for distractions. Luckily, when cooped up in one place for an extended period of time, our favorite guitarists and their collaborators tend to occupy their time by, what else, creating.

Some artists have even chosen to move up releases that they had scheduled to unleash in the summer, or even later, to keep us company in this difficult time. This has unexpectedly led to an impressive glut of phenomenal, boundary-pushing new guitar tracks for your listening pleasure.

Ready your speakers or headphones, and see which track in our playlist strikes your fancy!

We’re calling it now: this is the sexiest coronavirus slow jam there will ever be. Don’t even try to compete. And it’s no wonder, given the potent combination of neo-soul dynamo Leon Bridges and eternally hunky guitar sage John Mayer, who lends his vocal talents and a bouquet of tasteful licks.

Mayer’s lightly phased solo kicks in at 1:48, with some wide, wailing bend-and-release lines, and a slick Hendrixian pull-off conclusion.

If your relationship - either with your guitar or your significant other - needs a little stimulation during this troubled time, we’d advise you light some candles, pour a glass of wine or two, and let these silky grooves caress your speaker. (MAB)

Her status as one of the all-time greats of UK folk already established, Marling abandoned the August release of her latest opus and instead dropped Song for Our Daughter this week, so as to provide some brief respite from lockdown-itis.

And praise the acoustic gods she did: opening track Alexandra is a beautifully measured slice of contemporary folk that’s up there with Marling’s best.

Lord knows what tuning she’s employed from her Joni Mitchell-esque compendium, but the voicings here are simply exquisite, with tasteful lap steel ringing out the Laurel Canyon vibe. (MAB)

So uh, as it turns out, Jeff Beck and Johnny Depp have been secretly working on music together for years! While it might be a while before we hear the full fruits of the odd couple's labor, this week the pair decided to - for obvious reasons - release their version of a song they had worked on extensively, John Lennon's post-Beatles masterpiece, Isolation.

Unsurprisingly, Beck injects the song with a bluesy flavor, but his playing always retains the moving anxiety and fear that permeates the original. Despite his star power, Depp lets Beck shine here, turning in a solid and restrained vocal performance, while letting Beck (the solo after the first chorus stings in particular) do the emotional heavy lifting. (JM)

BPMD - Toys in the Attic

In the lead-up to the band’s debut covers album American Made, the quartet have released a cover of Toys in the Attic, the feel-good classic rock freight train made famous by Aerosmith. It’s given a blazing hard-rock facelift here, with Demmel adding his own brand of shred to the guitar solo. (SR)

Love Remains was one of our favorite albums of 2019, and this week, the Jeff Beck and Prince-approved bassist debuted a dark, moody video for one of that album’s highlights.

Killing Me sees angular Soundgarden-esque guitar textures and groove-heavy basslines married to Wilkenfeld’s ethereal vocal, cementing her as one of today's most compelling voices in alt-rock and beyond. (MAB)

Wallflower - Eat Away at My Heart

Heralding the era of the self-isolating music video, the respective members of London emo-rockers Wallflower hit their beds and couches to film a candid clip for this verifiable banger.

Eat Away at My Heart showcases shimmering edge-of-break-up arpeggios, teamed with lashings of reverb and a massive, wah-drenched chorus. The band’s love of Radiohead and Paramore are both very much in evidence here, and it makes for a winning sonic formula. (MAB)

Asking Alexandria - Down To Hell

While Asking Alexandria’s new material may be a far cry from their younger metalcore days, they still produce plenty of six-string moments to marvel at.

Take, for example, the quintet’s latest track Down To Hell. Released ahead of upcoming album Like A House On Fire, the song is undeniably rooted in early AA, with pepperings of heavily distorted vocals amongst the anthemic gang chants, and guitars taking center stage. (SR)

The ever-changing lineup of hard-rock supergroup The Dead Daisies has now come to include the legendary "Voice of Rock," Glenn Hughes. And from the sounds of their first single with the Deep Purple/Black Sabbath veteran on lead vocals, Unspoken, it's already proven to be a match made in heaven.

Replete with an incredibly satisfying beast of a riff courtesy of our old friend Doug Aldrich, amazing howls from Hughes and thunderous drumming from Journey man Deen Castronovo, hard-rock doesn't get much more straight-ahead - or effective - than this. (JM)

Already known for a successful career as lead guitarist for the metal band Meka Nism, Bobby Keller has toured with massive names from Evanescence to Hellyeah to Gojira. Now, he tosses his hat into the solo career ring with Reign of Fire, a blazing instrumental piece which clearly draws inspiration from guitar's best-known virtuosos.

Needless to say, the track takes you on a pretty rapid journey. From the outset, orchestral atmospheric ambience is followed by fierce drop-tuned riffs and staggering leads. Sprinkled with tapping passages and monstrous breakdown riffs, this is one of the most exciting instrumental guitar tracks we’ve heard in a while. (SR)

The Black Dahlia Murder - Removal of the Oaken Stake

The track showcases just how tight the Michigan quintet are as guitarists Brandon Ellis and Brian Eschbach deliver harmonized guitar lines which fuse perfectly with the machine gun-esque stickwork underneath. Honestly, it’s hard to pick a standout from Verminous due to the sheer quality of the songwriting throughout, but the Oaken Stake possesses all the guitar goods BDM fans have come to hold dear. (SR)

Releasing albums at a clip that rivals even the Bucketheads of the world, Japanese ambient specialist Chihei Hatakeyama has quietly put together one of the most extraordinary discographies in the genre over the last decade. Though ambient albums can sometimes be a dime a dozen, Hatakeyama's music is always immaculately crafted, with perfectly intertwining layers of keyboards, effects and guitars.

Rose chain - from Hatekeyama's latest full-length, Void XX - lies on a pillow of stunningly beautiful playing, doused with just the right coating of reverb and delay. Effortless and cinematic, Hatekeyama's playing here completely steals the show without ever calling attention to itself. (JM)