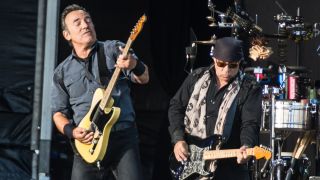 We get it. Our weekly roundup of essential guitar tracks has been the single most important thing guiding you through the COVID-19 lockdown. It makes sense, too - what better way to forget about the negative happenings of the world than to immerse yourself in the latest and greatest from the world of guitar?

You’ll be delighted to hear that it’s that time of week again - the best six-string tracks from the last seven days are in. We’ve got the first track from Bruce Springsteen’s newly announced, hotly-anticipated new album, a new project from Pearl Jam’s Stone Gossard and a earth-shattering new entry from Connecticut metal outfit Hatebreed, among a host of others.

So sit back, plug your headphones in (or speakers if you’re indifferent about the opinions of your neighbors) and digest some of the strongest recent six-string material around.

Bruce Springsteen - Letter To You

The Boss always seems to have a Bat Signal-esque sense for when society needs him most. Take The Rising, his 2002 reunion with his beloved E Street Band comrades, for instance.

Though some of the album’s tracks in fact pre-dated the September 11, 2001 attacks, the LP played as a cohesive, moving work that fearlessly examined the psyche of, and made a commendable attempt at healing, a mourning nation entirely re-examining its sense of self.

So why should we be surprised that Bruce chose this moment for another long-awaited E Street Band reunion? No need to wonder why! Just get lost in the booming drums, glistening piano and that now-trademark E Street Band guitar attack - warm, jangling, welcoming and all-encompassing. (JM)

Taken from the soundtrack for new documentary All In: The Fight for Democracy, Turntables is a more live, ’60s-vibed effort than what we’ve come to expect from Monáe, and that really gives Kellindo’s guitar work the opportunity to shine. (MAB)

You might remember Ginger Pooley from her stint as bassist for Smashing Pumpkins' 2007 reunion, and the opening riff from new project Burning Pools certainly wouldn’t sound out of place on a record from Billy Corgan and co.

Guitarist Max Bernstein ramps up the sub-octave fuzz for this punkified take on alt-rock, while Pooley delivers a fist-pumping chorus. (MAB)

Hatebreed - Weight of the False Self

Hatebreed strike once again with Weight of the False Self, a lyrically motivational call-to-arms and instrumental throwdown that’s bound to please fans of the Connecticut quintet. The track comes ahead of the group’s upcoming album of the same name, to be released in November.

Opening with Jamey Jasta’s vocals over wailing guitar feedback and a four-to-the-floor kick drum, guitarists Wayne Lozinak and Frank Novinec follow with a groundshaking earworm riff which will undoubtedly set the tone of the record to come. (SR)

Tom Petty’s 1994 solo album, Wildflowers, is one of his greatest works. A dazzling examination of aging and its effects on his then-crumbling marriage - presented through the lens of unforgettable folky sing-alongs, brash rockers and stunning ballads - it was the product of an extremely prolific period for Petty.

Though Wildflowers itself ended up clocking in at over an hour, the sessions for it produced enough material for a separate full-length album, which is now finally seeing the light of day as the second disc of the upcoming Wildflowers & All The Rest reissue.

Befitting a legend-tier songwriter like Petty, Confusion Wheel - the second unreleased song we’ve heard from the collection - is as substantial as most artists’ career highlights.

Petty’s plaintive acoustic strumming drives the song, while giving room for its mid-period-Beatles-esque hooks to land beautifully. Of course, it wouldn’t be a great Petty tune without Mike Campbell, who - as ever - adds just the right touches, with a harrowingly swampy solo (played on a baritone) that vividly breathes life into the picture of anguish and indecision Petty so beautifully paints. (JM)

Nostalgic is right – this track from 18-year-old Canadian Lauren Isenberg is pure ’90s indie-rock revival, but the radical contemporary pop production in the chorus updates the format for a new generation.

Epica display all the hallmarks of modern European symphonic metal: soaring strings, long hair, a singer with a spectacular vocal range and a truly formidable guitar partnership. The Dutch six-piece today released The Quantum Enigma (B-Sides), a collection of, you guessed it, B-sides from 2014 album The Quantum Enigma.

The nine tracks have just been added to streaming platforms, previously only being available in physical formats.

In terms of songwriting, its opening track, Memento, is nothing short of marvelous. Amongst a complex arrangement of band instruments and an orchestral section, guitarists Isaac Delahaye and Mark Jansen weave intricate six-string melodies through both its heavy and melodic sections, guiding listeners through its vast sonicscape. (SR)

Painted Shield – I Am Your Country

This week, Pearl Jam’s Stone Gossard announced he would be uniting with folk hero Mason Jennings for an all-new project – but it doesn’t sound anything what you’d expect.

Menacing synths fuel Painted Shield’s first single, with guitars filtered and chopped up by mixer John Congleton – famed for his work with St. Vincent. It’s a bracing and brave release from artists who have traditionally led with guitars at the fore. (MAB)

Though his day job involves trading licks with one of America’s premier songwriters, Jason Isbell, Sadler Vaden can write a mean tune himself.

Written during what Vaden described as “one of my worst days,” Best Days is a beautiful acoustic gem that finds the singer/songwriter staring down our current malaise and deciding to remain upbeat about the future - miraculously - without a hint of cheese or tone deafness.

Vaden’s fingerpicking is, of course, immaculate, and perfectly serves the song’s refreshingly grounded optimism. A perfect pick-me-up, this. (JM)

Naming a track Journey Through the Twilight Desert constructs one hell of a sonic pedestal to aspire to, but guitarist Claire Simson’s savvy use of effects and dynamics paints a vivid, vicious portrait. (MAB)