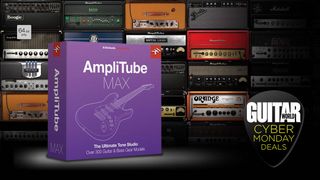 We’ve already seen some incredible guitar plugin deals from Waves and Positive Grid, but IK Multimedia may well have won the Cyber Monday amp modeling stakes with this astonishing AmpliTube Max deal, which gives you $250 off the most comprehensive guitar plugin suite known to man.

For just $249 (as opposed to the original price of $499), you can get just about any guitar tone you can imagine, with all the gear found in AmpliTube 4 Deluxe, AmpliTube Fender, AmpliTube MESA/Boogie, AmpliTube Orange, AmpliTube Ampeg SVX, AmpliTube Jimi Hendrix Anniversary Edition, AmpliTube Slash, and AmpliTube Metal.

Add in IK’s clever Cab Room, an onboard eight-track recorder and unbelievable range of guitar amps and pedals, and you have a one-stop shop for all your guitar recording needs.

Head over to Sweetwater right this very second to secure yourself this insane deal.

IK Multimedia AmpliTube MAX: $249 at Sweetwater
This comprehensive suite of guitar amps and effects is half-price at Sweetwater, and makes this perhaps the best guitar plugin deal of Black Friday, Cyber Monday and beyond.View Deal