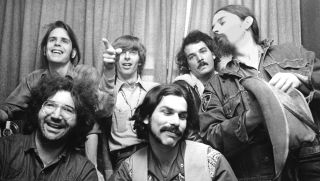 The Grateful Dead's first official career-spanning documentary, Long Strange Trip: The Untold Story of the Grateful Dead, will make its DVD and Blu-ray debuts this fall. In addition, a new Deluxe Edition featuring unreleased bonus content will be available exclusively from Dead.net. Both versions arrive more than a year after the acclaimed four-hour documentary premiered at Sundance, followed by its exclusive release on Amazon Prime.

The documentary, which was nominated for the "Best Music Film" Grammy Award last year, was widely praised by fans and the critics alike, including the Los Angeles Times, which called it: "One of the most engrossing rock docs ever made."

All versions include the original documentary in stereo, as well as a new 5.1 surround mix. They also feature a new commentary track with director Bar-Lev and editor John Walter. The Deluxe Edition boasts a previously unreleased, six-song live performance from the band's first show overseas, recorded on May 24, 1970 in England at the Hollywood Festival, along with backstage footage from the band's first trip over the pond. The Deluxe Edition also includes two live performances from 1989 ("Dear Mr. Fantasy" and "Death Don't Have No Mercy"). Snippets of all the bonus content were used in the film, but this marks the first time they will be released in their entirety.

"Around 2003, while winding through the 16mm film outtakes for The Grateful Dead Movie in preparation for its DVD release, I came across a couple of unlabeled cans of 16mm film. I loaded the first reel onto the Steenbeck film viewing/editing table and was amazed by what I saw," says band archivist David Lemieux. "Not only rare, exceptional quality material from the performance at the Hollywood Festival, but loads of other terrific footage, showing the band at a Warner Bros. Records party in London (Pigpen surrounded by suits!), at a photo shoot ('that's one uncooperative bunch of musicians!'), at a rehearsal hall performing 'Candyman' vocal harmonies and, most exciting of all, backstage at the festival. This is truly some of the most remarkable, candid, and interesting footage in existence of the Grateful Dead and we're thrilled to be releasing the entirety of this wonderful historical document."

For more details on Long Strange Trip: The Untold Story of the Grateful Dead, as well as pre-order information, check out Dead.net.