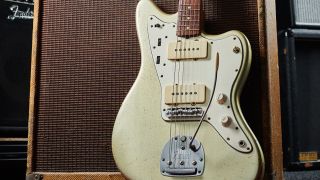 With its string-popping bridge and rarely utilized rhythm circuit, the Jazzmaster has never been the most player-friendly electric guitar design in the Fender catalogue - and it seems the company’s CEO, Andy Mooney, agrees.

In a new interview with Reverb, the Big F’s big boss made the admission while responding to a question regarding the former affordability of Jazzmasters, which saw them adopted by a bevy of ’90s alt-rockers.

“I have Jazzmasters and Jaguars, Duo-Sonics - I have four in a line on my wall from 1966,” Mooney says.

“I've never played one of them, because then they were not particularly good guitars when they were first introduced, in my view.

“But like many of the things that we've done since - if you look at the Johnny Marr rendition of the Jaguar, that's a killer guitar. We've made all those guitars functionally better. They've always been aesthetically beautiful, but now you can actually play them.”

Many Jazzmaster owners modify the instrument from its original 1958 configuration, with one of the most common upgrades being the installation of a Mastery, Adjusto-Matic or Mustang bridge, to avoid the strings popping out of the saddles - a common occurrence with fingerpicking or heavier playing styles.

These bridges commonly appear on Fender’s modern-day Jazzmasters, while its newly launched American Ultra model, which comes with noiseless pickups, a contoured heel and compound radius, recently caused us to ask the question: has the Jazzmaster finally gone mainstream?

Mooney also let slip to Reverb that a new Jim Root Jazzmaster will be landing sooner than we’d anticipated.

“I think my go-to [metal guitar] is going to change when Jim Root's [new] signature Jazzmaster comes out this year,” he says. “I think it’s going to be another killer guitar.”

Another pre-NAMM launch from Fender? We’d be surprised, but stranger things have happened...