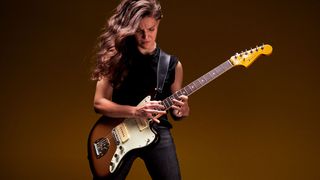 When Fender dropped the American Ultra Series this week, its fresh hot-rodded takes on classic outlines, it offered a number of neat touches - contoured heels, new neck shape, compound radius - but arguably the most significant change was the inclusion of a Jazzmaster in the line-up.

Here we have an instrument beloved of electric guitar anti-heroes, one that’s beset with playing idiosyncrasies and ended up discontinued owing to its unpopularity now appearing in a high-end, boutique guise, complete with Fender’s first-ever noiseless Jazzmaster pickups. How did this happen?

By now, we’re all familiar with Jazzmaster lore: the model was introduced in 1959 as a way to lure jazz guitarists away from Gibson courtesy of Fender’s first-ever rosewood fingerboard and newly designed single coils with wider, flatter coils, but - despite a brief love affair with surf - the design proved unpopular and was discontinued in 1980.

Part of what made the Jazz so distinctive was also what put plenty of players off: the rhythm circuit, complete with awkward roller controls, was just too dark for a lot of styles, while the bridge that accompanied the floating tremolo was prone to strings popping right out of their saddles with heavier picking.

Perhaps as a result of these idiosyncrasies, used examples would sell for relatively affordable prices on the used market, and thus the Jazzmaster went on to achieve cult status at the hands of alternative heroes such as Sonic Youth, Kevin Shields and J Mascis. Now, that, in turn, has very gradually filtered back into mainstream guitar design.

It’s arguable that Fender’s renewed interest in the model - which has appeared in all its recently launched model ranges, from Player to American Performer and Vintera - has been prompted largely by rival companies offering up their own takes over the past decade.

You need only look to the likes of the Fano JM6, Tom Anderson Raven or the Suhr Classic JM to see how other builders have taken the offset formula and given it the boutique treatment - something that was taken to its limits in 2017 as Suhr and Ian Thornley teamed up for an HSH, string-through-body signature model, custom-built for speed and versatility.

Then there are the spec tweaks seen in G&L’s 2017-launched Doheny, which equipped the outline with a Strat-style tremolo - something Fernandes had been doing back in the ’90s with its JG series, but took Fender until 2018 to achieve with its stripped-back American Performer model.

We also have one player in particular to thank for renewed interest in the Jazzmaster, and it ain’t Thurston Moore; rather, Slipknot’s masked riffsman Jim Root, who used the body as the base for his brutal, no-nonsense pairing of active humbuckers, hardtail bridge and single volume control.

You could, of course, argue that, having stripped out the floating tremolo and single coils, Root’s design ceases to be Jazzmaster. But its influence on Fender’s catalogue since is undeniable; without it, it’s unlikely the American Professional Jazzmaster would have quite such a pared-back control configuration, while the Contemporary Active Jazzmaster is practically a Jim Root signature Squier in all but name.

Team that with concessions to contemporary playability - Fender’s use of Mustang and tune-o-matic bridges, as opposed to the string-popping original, not to mention Mastery’s superior replacement - and improved switching options, and it feels like the Jazzmaster has truly come of age.

Artists have recognized that fact, too: the fretboard-spanning metal prowess of Baroness’s latest recruit Gina Gleason made her Fender’s ‘face’ for the Ultra Jazzmaster, while players as diverse as blues favorite Samantha Fish, looping superstar Tash Sultana and singer-songwriter of the moment Sam Fender have all been found wielding the model in recent years.

So what next for the offset of the moment? Well, with Fender’s announcement that it’s set to introduce more signature guitars for female artists next year than in its entire 70-year history, we’d be foolish not to bank on one of them being a Jazz.

And although its simple bolt-on design is hardly unique among the Fender catalogue in being suitable for configurations of all kinds, we’d love to see a no-holds-barred dual-humbucker American Ultra.

Metal on a Jazzmaster? 60 years since its introduction, it’s still more likely than jazz...