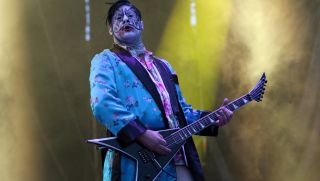 From having his pedalboard drenched with a “jacuzzi amount of water” mid song to being fake chair-smashed by Fred Durst, Limp Bizkit electric guitar player Wes Borland hasn’t always had an easy go of things.

But Borland always perseveres, as demonstrated in a new Instagram post where the guitarist announced he had “nailed” his first show back after recovering from a broken hand.

“I can’t express the amount of anxiety I was having leading up to this but three fingers was enough to get the job done,” he wrote.

Nailed my first show playing with a recovering broken hand. I can’t express the amount of anxiety I was having leading up to this but three fingers was enough to get the job done and Krasnodar was amazing. Thanks to all my brothers in @limpbizkit for believing in me and my amazing support system including @aliejoboxblock and new costuming by my friends @thewisehatter and @adelemildred for bringing it all together. Big love for Russia. Big love for Krasnodar. Wes Borland

As for the Bizkit haters out there that might attest that three fingers is perhaps already two more than necessary to jam, say, Break Stuff or Nookie, may we direct you to Borland’s own words of wisdom from years back:

“Musicians are not mathematicians. Feeling and soul over technique and speed.”

Preach on, Wes, and welcome back.