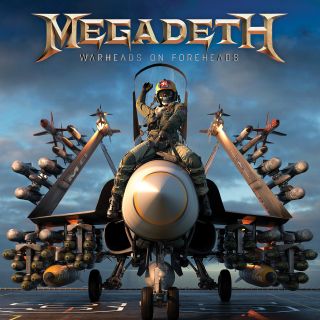 Megadeth have announced the release of a new greatest hits package, Warheads on Foreheads. Due March 22, the compilation features 35 remastered tracks hand-selected by frontman Dave Mustaine. You can check out the cover art above.

As previously reported, Megadeth will also release expanded reissues of two catalog albums, 2001’s The World Needs a Hero and 2004’s The System Has Failed, via BMG on February 15.

Both albums, which have been out of print on CD for five years, are newly remastered by Ted Jensen (Guns N’ Roses, Mastodon, Machine Head) and include rare live bonus tracks.

The World Needs a Hero features a live version of a bonus track from that album, “Coming Home,” while The System Has Failed offers live takes of “Time” from 1999’s Risk and “Use the Man” from 1997’s Cryptic Writings, as well as “The Conjuring,” from 1986’s Peace Sells… But Who’s Buying?

Additionally, Megadeth will head out on the road as the opening act on the next leg of Ozzy Osbourne’s No More Tours 2 outing, beginning May 29 in Atlanta. In the fall, they will also embark on the first-ever Megacruise, which will take place aboard the Norwegian Jewel on October 13-18, 2019, leaving from the Port of Los Angeles, with stops in San Diego and Ensenada, Mexico. Among the artists that will join Megadeth on the cruise are Anthrax, Testament, Corrosion of Conformity, Devildriver, Doro, John 5, Armored Saint and Beasto Blanco. For more information, head over to Megacruise.com.

Warheads on Foreheads is available for pre-order here beginning January 25.