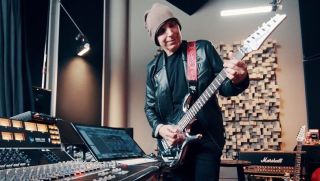 NAMM 2020: Last month, IK Multimedia confirmed that its long-rumored AmpliTube Joe Satriani would be arriving the following month. Plus, in an even more awesome twist, the company also announced that it would be giving fans the opportunity to help choose the gear that would be featured in the collection.

Now, the wait is finally over. Featuring those aforementioned fan choices, and precise models of Satriani's amps and pedals - created alongside the man himself - AmpliTube Joe Satriani will be available next month for Mac/PC, iPhone and iPad.

Available as a desktop app and plug-in for any DAW, the AmpliTube Joe Satriani features a total of five stompboxes and three amps.

On the amp front, there's the Satch VM, based on Satriani’s Marshall JVM410HJS signature head; the SJ50, modeled after a ‘93 Peavey 5150, both with matching cabinets; and the Boston 100, an expanded version of the ’82 Scholz Rockman model with a stereo mode and cabinet modeling.

For Mac and PC users, AmpliTube Joe Satriani runs inside the AmpliTube Custom Shop, which is available itself as a free download. The new models will be released in February as a bundle from within the Custom Shop, the IK Multimedia online store and dealers for $/€99.99, and are now available for pre-order.

For iPhone and iPad users, AmpliTube Joe Satriani will be available via in-app purchase from within AmpliTube CS for iPhone or iPad for $24.99. Individual models may also be purchased on their own.

For more, stop by IK Multimedia.