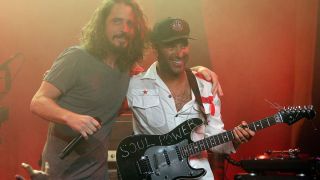 NAMM 2020: Although Rage Against The Machine have only just reunited, it seems Audioslave is also on the agenda for firebrand guitarist Tom Morello, as he used his recent Guitar Revolution camp to announce a production-line version of his iconic Soul Power Stratocaster.

The news comes via an Instagram post from YouTuber Ryan ‘Fluff’ Bruce, an instructor at the camp, where he stated, “Today, Tom Morello and Fender unveiled the Soul Power signature production model”.

Now, that’s not entirely true, because Fender has yet to comment on the post, but we’re likely to find out whether it’s for real at the NAMM show next week.

The Soul Power Strat was Tom Morello’s main guitar throughout his time in Chris Cornell-fronted supergroup Audioslave, and was used for all songs in standard tuning on the group’s self-titled (2002) and Out Of Exile (2005) albums, including singles Cochise, Like A Stone and Your Time Has Come.

Morello’s original guitar was an FSR Aerodyne Strat, which he had fitted out with an Ibanez Edge locking tremolo system (which would likely be replaced with a Floyd Rose on a production run), Seymour Duncan Hot Rails in the bridge position, and his trademark kill switch.

If the production-line Soul Power Strat does indeed come to fruition, that leaves us with two questions:

We’re looking forward to getting to the bottom of this one in the coming days, but given Morello recently teamed up with Fender to promote its Game of Thrones models, the signs certainly look positive...