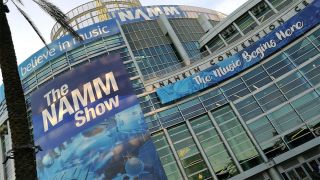 You’ll often hear guitarists talking about NAMM, especially at the beginning and middle of the year, but do you actually know what it is?

Here, we’ve compiled answers to any questions you may have about the mammoth music gear trade show, the guitar gear you can expect and everything else you could ever possibly want to know...

The National Association of Music Merchants (NAMM) Show is the largest music gear trade show in the world, founded in 1901.

When does NAMM take place?

There are two shows each year: Winter NAMM takes place at Anaheim, California, USA, at the Anaheim Convention Center, while the smaller Summer NAMM is held in Nashville, Tennessee each July. This year's is 18-20 July.

Which companies are there?

All the major players are in attendance, so the likes of Fender, Gibson, PRS, Marshall, Ernie Ball and Ibanez will always be touting new kit.

Besides previewing all the biggest releases of the forthcoming year in gear, the real beauty of NAMM is uncovering hidden gems from up-and-coming companies dotted around the showfloor - the most revolutionary products can be tucked away by the pizza stall in the darkest corner of the basement floor. Sometimes.

Summer NAMM is a smaller affair, but still frequented by a range of manufacturers big and small.

When can I buy the gear that’s announced?

Ah, well, that varies - sometimes dramatically. Some products are already lining retailers’ shelves when they appear at the show, but others take considerably longer - wise-cracking industry vets will sometimes joke that NAMM stands for Not Available, Maybe May.

Manufacturers will also use NAMM to showcase prototypes that are some way off from release or share one-off custom creations - these often end up as the big talking points of the show.

Do famous players make an appearance?

They most certainly do - in their droves. Anyone and everyone has rocked up to sign, speak or perform over the years, with recent shows playing host to John Mayer, Steve Vai, John Petrucci, St Vincent and even Ed Sheeran. You’ll occasionally spot these famous faces browsing the stands and testing out new gear, too.

NAMM is very much a trade-only affair, but you have your good friends at GW to cover the show and tell you what’s hot and what’s not with our constantly updated coverage.