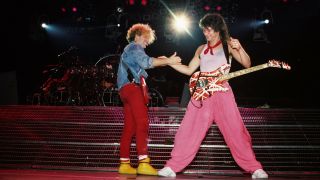 The debate over the musical merits of Van Halen vs. Van Hagar will likely rage on for time immemorial.

But here's some new information that might lead electric guitar players to reconsider their feelings on the matter: Sammy Hagar is not the one responsible for all the keyboards.

At least, that’s according to Hagar and bassist Michael Anthony.

"Finally, I get my soapbox here," Hagar began. "Everyone blamed me for the freakin’ keyboard playing on the Van Hagar era. Starting with 5150 and OU812 we went very keyboard-oriented. I didn't do any of that. That's what Eddie did. Eddie wanted to do that.

“He liked playing keyboards, and he was freakin' good at it and he wrote these beautiful songs like When It's Love and stuff like that, and Why Can't This Be Love, and it's such a cool lick.”

Added Anthony, "Once Ed really got into the keyboard thing he barely pick up his guitar for a long time, I remember. He was just playing keyboards all the time."

“So I'd start singing and Ed would go, 'Oh, man, this is so cool.' And, of course, Valerie [Bertinelli, Eddie's then wife] would come in and validate it. When she heard Love Walks In, she’s going 'Oh my God.' And Eddie's going, 'Oh, man, my wife's happy, so I'm happy.' And I'm going, 'Well, I'm happy.' And you know, we had success and all that.

“But I kind of always got blamed for the keyboard songs. It was not me whatsoever. I'm a damn guitar player. Every time I would pick up, like for Finish What Ya Started or something like that, when I would instigate a song, it was a guitar song, 'cause I don't play keyboards.

Despite shifting the blame for the keyboards, Hagar, um, finished what he started by praising his former bandmate's facility on the instrument.

"The part that's most impressive to me is what a good keyboard player Eddie Van Halen is. He's got a left hand on the freakin' keyboard that's as good as freakin' Bootsy Collins on the bass, man.

"I mean, he's funky with that left hand. You know, listen to When It's Love, man!"