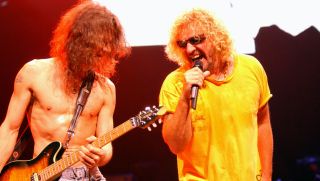 David Lee Roth may have recently declared Van Halen “finished,” but when have Roth and his replacement in the band, Sammy Hagar, ever agreed on anything?

In a new interview with Rolling Stone, Hagar said he could “foresee” a Van Halen reunion happening at some point in the future, and that the band “will never be finished.”

“Until Ed or Alex Van Halen die, they’re not finished,” Hagar said. “Those are two great musicians that can friggin’ do as good as most people at half-mast.”

“As a drummer and as a guitarist and creative person, Eddie, I can’t see them ever being finished. I wish they were more active, but I think Van Halen will never be finished.”

While rumors have swirled about Eddie Van Halen’s health over the past few years, Hagar, who acknowledges he hasn’t talked to the electric guitar great since the last time they toured together in 2004, says that he’s heard Eddie has “got it together.”

Regarding a tour, he continued, “If they want to get it together, they just have to call Dave or have to call Sammy. They can go out with [Eddie Van Halen’s son] Wolfie as a trio, but that’s not the legacy of Van Halen. I think they know that. I’m not predicting what’s going to happen, but I would tell you if there’s concerts next year, Van Halen will probably be on tour next year.”

As for what he would hope that tour would look like?

“My dream tour is the Sam and Dave tour with Ed, Al and Mike [Anthony],” Hagar said.

“Let Wolfie put his band together and open. I have a son, Andrew Hagar, who makes great music. Let Andrew open, let Wolfie play with his band in the middle and then have the Sam and Dave tour where we do an hour each. An hour with Dave songs and an hour with me.”

In 2019 a reported summer tour, which was rumored to include the return of Michael Anthony on bass, was cancelled before it was ever officially announced.

Said Anthony at the time, “From what I’ve heard, and I haven’t spoken to any of the guys, they were gonna try to plan a thing for this summer.

"And for whatever reason… They never got in touch with us about any kind of a contract or any kind of a meeting to discuss or whatever. And the next thing I knew, the plug got pulled on it.”