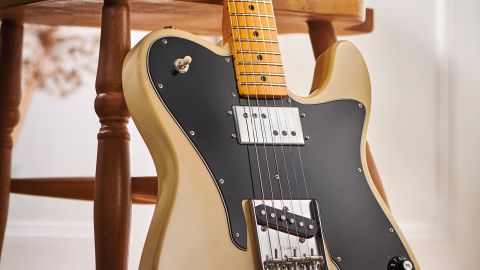 A celebration of classic '70s style and an excellent chance to reevaluate some Fender design details buried in the CBS-era mire, this Tele Custom is faultless, with a wide-ranging voice that feels far from a reissue.

While it was an astonishing decade for music, the 1970s was a bit of a low point for the electric guitar, certainly from the cornerstones of the industry, Fender and Gibson. Fender’s CBS era is especially reviled, with accountant-led manufacturing leading to poor quality.

But 50 years on, many of the designs from that period are viewed in a different light and numerous (once derided) models have long since found their way back into both fashion and Fender’s catalogue.

A great example from that era is the humbucking-loaded Telecaster trio of the early 70s: the Thinline, Custom and Deluxe, a clear and obvious attempt to gain some market from Gibson.

Various versions of these models have regularly been – and still are – available, constantly fuelled by new generations of players. But a big problem has been that original Seth Lover-designed Wide Range Fender humbucker. It used threaded Cunife magnets, a material that became impossible to source by the end of the 70s.

And while many pickup makers, Fender included, have made repros, they’ve had to use a different recipe.

For 2020, however, after considerable research and investment, Fender has brought the material back and this new ’70s Telecaster Custom (along with a smattering of Custom Shop models) is the first Fender USA production guitar for nearly 40 years to use a Wide Range humbucker to original specification.

You’ll know the most vintage-aimed American Original guitars are the closest you’re going to get before you move up to the Custom Shop, but this Tele is not a slavish reissue.

Guitars like this were known for their overweight ash bodies with a thick plastic poly coating that was also used on the necks and maple fingerboards. The list of ‘horrors’ from this period also includes three-bolt neck joints, a Tilt neck, that bullet truss rod adjustor... even the shape was wrong. In fact, there were plenty of good ideas let down by bad practice.

“That’s precisely the point,” Fender’s Tim Shaw tells us. “It wasn’t that the ideas were bad, it was that the execution was sloppy because of everything else that was going on at the time. That’s why the new Acoustasonic models have that Micro-Tilt - because I never wanted anyone to touch the saddle.”

This new version of the now much-loved Telecaster Custom, then, aims to correct those issues. That thick, gloopy poly finish is replaced with a clean, crisp nitro - and it’s far from overweight.

We were surprised, however, to see an alder body on the spec sheet instead of the expected ash, but this is something we might have to get used to.

“Our issue with ash right now is twofold,” Tim explains. “One is that the emerald ash borer [beetle] has been working its way south in America and as it does it’s pretty much killing all the usable ash.

“Most of the ash is harvested in Mississippi, and in the Deep South we had huge flooding the year before last that kept a lot of this stuff underwater and they couldn’t get it. So our ash stock went from, ‘Oh, we’ve got plenty,’ to ‘Oh, we don’t have much at the correct weight specification,’ and a lot of the stuff we can get is really heavy.”

In its American Original guise, the new Custom appears far from a long-lost relic. In fact, this piece feels more like it’s come from the modern-day Custom Shop than the 70s. But it wears its 70s chic rather well, particularly in this muted cream Vintage Blonde finish, which is just marginally translucent over the alder body.

Hardware details remain pretty much period accurate with those (again, once derided) ‘F’ logo tuners and their slot head posts, which are perfectly functional; the easy-to-adjust bullet truss rod adjuster is likewise fit for purpose.

Always less popular is the three-bolt neck join that, incidentally, actually uses a bolt in the central lower position below the usual machine screw. But with a correctly cut and level neck pocket as here, it’s rock-solid.

Plus, thanks to the Micro-Tilt, you can adjust the pitch without needing a shim – a feature we see on the current American Professional range, for example, albeit with four screws, and on the far-from-vintage Acoustasonic Tele and Strat, as Tim mentioned earlier.

Of course, while many humbucking Teles use the more standard Tele volume, tone and three-way lever setup, even though we have a single coil at the bridge, here we have dual volume and tones all mounted on the large scratchplate with its 15 screws.

And then there’s the new Wide Range humbucker at the neck, very firmly mounted with four screws but with a much larger footprint and wider aperture than a standard Gibson-style humbucker.

For example, the Wide Range measures approximately 79 by 45mm compared with the 70 by 38mm of a regular covered Gibson-style ’bucker.

As we’ve reported before, it’s far from easy to access the electronics on guitars such as the Tele Deluxe and this Custom. To remove the scratchplate there are 15 screws, and to service, replace or even take a look at the bridge pickup you need to remove the entire bridge assembly.

As Tim Shaw discusses later on in this feature, things are pretty much vintage accurate with unusual 1meg-ohm volume pots and 250k tone pots – all are CTS. Tone caps are .022 microfarads, wired modern-style. There’s no ID on the Wide Range pickup at all, although you can clearly see those threaded Cunife magnetic polepieces.

If Fenders from the 70s felt like this, their reputation might not be so sullied. It’s a touch over average in weight but certainly doesn’t approach the boat-anchor bulk of many from that decade. Importantly, the neck isn’t covered in an over-thick poly finish.

Yes, the finish sits over the frets before they’re levelled and dressed, so they feel marginally wider than the same wire on a rosewood ’board, but there’s enough height for smooth bends, and this is a neck that does feel very smooth overall. It has a slightly ‘sticky’ feel after some hours of playing, though not in a soft fashion.

Despite the spec sheet telling us the guitar ships with 0.010-gauge strings, these are nines and while it gives the guitar a slightly lighter feel than any of our references, it does add to the slinky playability. Setup and intonation are really good – well, as good as the three-steel-saddle bridge allows.

The medium C neck profile is exactly that: fairly modern standard in lower positions, 21.5mm deep at the 1st fret, but not filling out quite as much as the American Pro’s neck at 22.6mm by the 12th fret.

Controversially for some, we have a 241mm (9.5-inch) radius to the ’board, not the original 184mm (7.25 inches), but in combination with the neck shape and the smooth, slinky feel of the fingerboard face and frets, it works extremely well.

For many, a Telecaster is simply about its bridge pickup, and this supplies the cut with a little extra heat. It’s got that steely bite in spades and with a little added compression it has you practicing your country licks for days - a different sound from the rawer and beefier clout of a typical early 50s ride.

Switching to the neck humbucker, surprisingly perhaps, it doesn’t overpower the bridge as its ‘hot’ DCR might suggest, yet it fills in the lows especially and smoothens the midrange while retaining the snap of the guitar itself. Compared to our ’69’s single coil, it’s a sort of halfway house between that and a PAF-style Les Paul, for example.

But it’s the pickup mix where the money lies. The typical single-coil mix’s funky sparkle sounds enhanced. There’s more depth but still plenty of cut and, of course, you can tame the bridge’s high-end simply by rolling off its own tone.

The volumes provide less subtlety than you might think. A slight roll-off of either in the mix position quickly reverts to the solo pickup sound - but sit the Custom in a band mix, not least one with a little Stones-y swagger, and the classic bite of a Tele is simply supported with a little more meat and depth, while never losing that snap and bite.

It’s a different experience from the current American Professional Tele Deluxe, which moves closer to a thicker Les Paul voice. This Wide Range, as we said, sounds a little lower powered but with that additional clarity. It’s far from a one-trick pony, though: from beautifully clear cleans to notable definition with some overdrive and dense effects, it has huge potential on this platform.

While 2020 is all about the 70th anniversary of the original Fender Broadcaster, the return of this humbucker is certainly worth getting the bunting out for.

At this American Original level, it’s also celebration of classic 70s style and an excellent chance to reevaluate some Fender design details that were buried in the mire of the CBS era. A faultless guitar with a wide-ranging voice that feels far from a reissue and very much now.