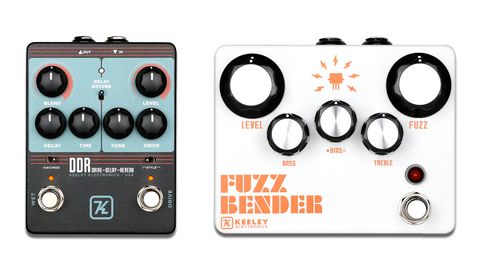 The Keeley Fuzz Bender will likely end most guitarists’ search for the perfect fuzz pedal, while the DDR is for players looking for great overdrive, delay and reverb effects but who don’t want to deal with a pedalboard.

Is there such a thing as a pedal that is too good? Considering the fickle nature of most guitarists who are on a never-ending search for the perfect tones (not to mention how much one player’s preferences vary from another’s), this probably isn’t an actual concern for pedal designers hoping to maintain guitarists’ endless appetites for new products, and to keep them coming back for more.

Yet every now and then, a few pedals come out that address players’ needs so well I wonder if the designers worry that they may be shooting themselves in the foot, by making what could be the last effect device of that nature that guitarists would realize they need.

Keeley recently introduced two pedals that are certain to end many players’ tone-chasing pursuits. The Keeley DDR satisfies a pair of most guitarists’ basic needs by providing fully independent overdrive and delay/reverb effects in a single box, ideal for those who like to keep things simple. For fuzz aficionados, the Keeley Fuzz Bender provides a comprehensive palette of square-wave distortion tones and textures.

The Keeley DDR and Fuzz Bender are each housed in a medium-size rectangular stompbox enclosure that’s the familiar size of a Phase 100. The Fuzz Bender takes advantage of these slightly larger dimensions by providing large knobs for the Level and Fuzz controls that users can adjust with their feet, if desired.

Several details make the Fuzz Bender truly stand out from the pack: its three-transistor design that combines silicon and germanium fuzz stages; its Bias control that dials in textures from smooth, Big Muff-style to glitchy, sputtering grit, and everything in-between; and its active bass and treble EQ controls that provide up to 20dB of boost/cut at 100Hz and 10kHz respectively.

The DDR is not a pedal for nostalgic German communists or gamers with happy feet, but rather an ingenious combination of overdrive and delay/reverb.

Two recessed mini slider switches mounted on the right vertical surface allow you to select true bypass or delay/reverb trails that continue after the DDR is disengaged, and use TRS cables to insert separate effect pedals between the overdrive and delay/reverb effects.

The problem with most fuzz pedals is that their sound can be a little too individual, so what sounds good with one guitar or amp probably won’t sound good with another.

The Fuzz Bender ends the Goldilocks routine of going through dozens of pedals hoping to find one that’s just right, thanks to its versatile EQ and bias controls. Whether you love fat, muddy bass that oozes like two tons of sludge, razor-sharp treble that cuts like piranha teeth or smooth, sustaining violin tones, the Fuzz Bender can do it all and more.

The DDR is a useful "meat and potatoes" pedal for players who want to keep their rigs as simple as their tone is pristine. The overdrive section is as good or better than many other overdrives that cost the same or more, providing everything from harmonically rich clean boost to edge-of-distortion Screamer sounds.

The delay/reverb section is similarly straightforward, providing analog (vintage) or digital (modern) delays from slapback to about 1.2 seconds and spring (vintage) or plate (modern) reverbs with rich, vibrant resonance. The DDR covers the essentials for guitarists who want to plug in, play and get ’er done.