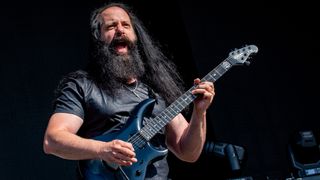 Well, sure, but when we are talking guitar albums we are being that little bit more exacting; we are looking for the albums with guitars front and center, whose existence revolves around the instrument, around what it’s doing, and where the player is taking the guitar in terms of tone, technique and composition.

That is where the past decade has been fascinating. It saw hardy perennials such as Slash, Megadeth, Rush and Metallica mixing with the likes of Plini, Periphery and Intervals, bands whose grasp of technique is only matched by their master of dynamics. The same could be said for Animals as Leaders.

The common thread is that each guitarist listed here has never settled for what has come before. There’s an appetite for refinement, sure, but there’s a creative restlessness, too, an urge to push technique further, to think bigger.

Your number one guitar album of the decade features one such guitarist, and the good news is, he’s far from finished yet. What’s the betting we find him here again in 10 years’ time?

Distance Over Time was another tour de force of technique, an album that sees John Petrucci stretch and extend the musical potential of the electric guitar. While we could awe at moments like the S2N solo, or the riff to Paralyzed, it’s the vision that’s most impressive.

Sure, Petrucci’s chops are jaw-dropping, but it’s his imagination that makes Distance Over Time the guitar album of the decade. With this, and his ability to go large with his compositions but liberally sauce them with those wow moments that make you hit pause then rewind, the album is packed full of riffs and grooves stick in your head long after the album’s finished.

The supergroup power-trio might have been formed a couple of decades too late to enjoy enormodome largesse courtesy of a booming ‘80s hard rock market but they perfectly articulate its good-times vibe and technical excellency.

Hot Streak is kinetic, fun, alive, and it finds Richie Kotzen in his element as his effervescent guitar dovetails with the prodigious talents of Billy Sheehan and Mike Portnoy.

Fortress has already been nominated for the best solo of the decade for Cry of Achilles but, in truth, Alter Bridge’s 2013 album is front-to-back essential listening for those looking for an exemplar of technically adroit and melodically up-front contemporary metal guitar playing.

Is there anyone better at box office shredding or writing big riffs for big shows than Mark Tremonti?

Even if Jason Becker hadn’t been diagnosed with ALS (Lou Gehrig's disease) some 30 years ago, he was always the type of musician whose vision would have ultimately commanded an all-star cast of collaborators.

His playing had already taken the guitar into the next dimension. Now, sadly, unable to play, Becker has assembled that all-star cast here for an eclectic and life-affirming album that invites the likes of Marty Friedman, Steve Vai, and Uli Jon Roth to help bring his compositions to life. It makes for an incredible story, absolutely, but what an album.

With his headless Stranberg, mind-bending phrasing and the consummate ease with which he performs all this voodoo, the Australian six-string phenom has an other-worldly quality to him that is writ large in Handmade Cities.

Greg Howe must maintain a super-strict calisthenics regime for that right-hand of his, because there is a flex and dexterity to it that gives the future-forward funk of Wheelhouse an almost supernatural sense of rhythmic snap.

Allied to this, of course, is Howe’s kinetic, jazzy lead style, that is confounding, playful and evidence that you are, indeed, in the presence of a virtuoso. Howe might have graduated into the shred firmament in Shrapnel’s heyday but with albums such as Wheelhouse he keeps pushing on.

The debut solo album from Slash features the Appetite for Destruction lineup of Guns N’ Roses minus Axl Rose. How do you replace Axl?

Oh, well, just invite Chris Cornell, Ozzy, Lemmy, Iggy Pop, Ian Astbury et cetera into the studio. That’ll do. And it makes for a fascinating record of many different energies, with Slash’s playing - the harmonic minor grandeur, the pentatonic fretboard pyro, the sleazy groove - its magnetic north throughout.

Of course, when you talk about the Aristocrats the conversation is usually fast-tracked towards the consensus that you’ve just gotta go see them live. It’s the chemistry, they say, the sense that anything can happen (because these guys can play anything, pretty much). But all that magic is right here.

Maybe that’s why it only took eight days to track their album. Guthrie Govan’s playing is such that he is comfortable sitting in with any band, but rock/fusion is truly his métier, and he’s on fire here. C’mon, Bad Asteroid? That’ll send you spinning through space and time.

9. Intervals - The Shape of Color

A dynamic work of instrumental progressive metal that allows Aaron Marshall to direct traffic with his whip-tight yet somehow elastic turn of phrase on guitar. This is dizzying stuff, music to shift the horizon.

Most call it progressive metal but tracks such as I’m Awake feel more like jazz, and Sweet Tooth is a pop-prog soundscape that wouldn’t be out of place in the arcade. Besides, video game reality seems more tangible than what Marshall is doing here.

Your 10th best album of the decade was 1.3 decades in the making. But if you were holding out to hear Tool in a long-form exploration of their sound, to hear Adam Jones ration the riffs for use only when it really mattered (i.e. on 7empest), favoring lush atmospherics and feedback swells in what is an ultimately hypnotic and engrossing audio experience, it was all worth it.

You might love Fear Inoculum now, but we all might need another 12 months to comprehensively fathom its depths.

Capturing all the raw magic of McGregor’s live show at Bury St. Edmonds, England, Bury’d Alive is a great entry point for anyone yet to avail themselves of her talents.

Featuring tracks from her first two studio albums, Like No Other and Lose Control, and the epic, eight-minute instrumental April, it positions McGregor as one among a number of players how are working the borderlands between blues and rock, finding new pockets of sound to play in.

The Stage caught most unawares. It dropped without fanfare, three years after Hail to the King, and saw drummer Brooks Wackerman make his debut for the Huntington Beach quintet. For a band who made their bones at the apex of the mid-noughties mainstream metal scene, they truly shoot for the moon with an album of vast ambition and scope.

Here, the demarcation between Synyster Gates as lead guitarist and Zacky Vengeance on rhythm is blurred; each dovetails the other for a record that is riven with bold harmonies, and pursues big ideas with aggression.

13. Steven Wilson - The Raven That Refused To Sing (And Other Stories)

One of the qualities that Steven Wilson brings to his projects is the uncanny ability to tell a story in song. This is what he’s doing here, each arrangement telling a self-contained story of the supernatural.

Engineered by Alan Parsons (Dark Side of the Moon), with a 128-page book of lyrics and narrative, The Raven is profoundly cinematic, with Guthrie Govan the perfect six-string collaborator to help Wilson deliver his vision.

Joe Bonamassa has been relentless this past decade. Relentlessly touring, relentlessly playing, and, of course, relentlessly accruing vintage gear to take back to Nerdville and posting pictures of it on social media to make us all drool.

Redemption saw him drop a dozen all-original compositions that position him at the summit of the blues-rock mountain. Producer Kevin Shirley recommended bringing Kenny Greenberg and Doug Lancio onboard to give Bonamassa some guitars to bounce off, and it proved a shrewd move, as Bonamassa, in person or with guitar, is a conversationalist, and here he is at the top of his game.

15. Animals as Leaders - The Joy of Motion

Tosin Abasi and Javier Reyes are guitarists of profound gifts. As architects-in-chief of the djent scene, they take the idea of heavy metal rhythm guitar into the realms of sci-fi, but, as The Joy of Motion is testament to, they typically resolve the more mind-expanding elements to ground them in something human and primal.

That could be a respite, a moment’s pause, a chance for us to calculate what they have just done, before they induce yet another bewildered state of awe in their audience.

Nick Johnston’s chops are ridiculous, but Remarkably Human is an album that sees him wield them judiciously across long-form compositions in which everything has its place. It’s a record of tone and feel, melodically audacious rock guitar set to a dreamy soundscape.

Check out A Sick and Injured Brain for a textbook exercise in using virtuoso musicianship to create nocturnal atmospheres where the vibe is all important. That’s Johnston’s appreciation of space right there.

The Canadian prog trailblazers’ final studio album before disbanding presents a smorgasbord of everything that made them great in the first place. Their latter period saw them in full command of light and shade, of the dynamics between hard-driven rock and the ethereal.

Take Caravan, for example, Lifeson’s guitar skulks around the low registers with Geddy Lee’s bass before resolving itself in a chorus whose gentle arrangements never attenuates the feeling of anxiety Lee is singing about.

Rush were alway the most humanistic of all the prog bands, aided and abetted by Lifeson’s note choices and ear for feel, and never more so than here, signing off on a formidable discography with typical poignancy on The Garden.

Dave Mustaine found his game face on Dystopia, and was helped immeasurably by having Kiko Loureiro to play off of. Reprising Megadeth’s state-of-the-art speed metal sound, as perfected in the Rust in Peace/Countdown to Extinction era, Megadave and Loureiro bounce off a menacing groove, Mustaine’s innate rock animalism contrasting nicely with Loureiro’s effortless flair and ear for the exotic.

You can hear a little Marty Friedman in Loureiro’s playing; he has a similarly virtuosic range. Mustaine’s playing is duly elevated in response.

You wait ages for one of the Big Four to chart in our end-of-decade poll and then two come along at once. Again, like Megadeth, Metallica here are chasing the thrash venom that laced their early catalog, and not without some success.

In Atlas, Rise!, Hetfield pens one of his best riffs of recent years, voted number four by you, and when you stack that up with the balls-to-the-wall fury of Spit Out the Bone, the lumbering menace groove of Am I Savage?, the stadium thrash of Moth Into Flame, Hardwired… is pretty gnarly all round.

As Misha Mansoor tells it, Periphery’s approach to writing Hail Stan was all “artsy and experimental” at first, but once they were through, it is the heaviness that defines the record.

It’s crushing, opening with the 17-minute epic Reptile, a song that started with a Mark Holcomb riff, before Jake Bowen and Mansoor added more riffs, more heaviness, and once “cycling of piling on” is complete you’ve got a sound that redefines heavy. Which is what Periphery do, and it’s exhilarating.