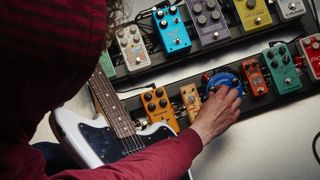 Though it's a little bit of a meme to poke fun at bedroom ambient guitarists, there's also no denying that the genre is booming at the moment. Not only is it a lot of fun to experiment with spacey sounds using reverb pedals and delay pedals, but a lot of beautiful, emotionally wrenching music has come out of the genre over the years.

The difference between ambient and post-rock, nine times out of ten, seems to be simply checking either the 'uses distortion' or 'band has a drummer' checkboxes, and there's a lot of crossover between the two in terms of sound design and effects techniques used.

Of course, as soon as you say post-rock, you're opening a can of worms that includes C86, shoegaze and dream-pop, but for our purposes, we'll assume that they fall under the same rough umbrella. My Bloody Valentine? That would be an article by itself...

So if you're a fan of soundscapes, drones and ambience, yet not sure quite where to start, then we've got the lowdown.

The cleanest and most 'pristine' of all the delay options, digital delays have two main benefits beside their cleaner, more bright tone.

The first is versatility. Once you've recorded a buffer, so long as you have the processing power to do so, you can manipulate it in a number of ways - modulating the tails, reversing it, pitch shifting it... the sky really is the limit.

The second is delay lengths. With a digital buffer to use, many digital delays can have delay times that run to seconds or more, which makes sense given that a looper pedal uses essentially the same technology.

Analogue delays use a Bucket Brigade chip, known as a BBD, to delay the electric guitar signal. It's named Bucket Brigade after a fireman's bucket chain, as it's something conceptually similar - a capacitor array that passes the signal along.

At longer delay times the signal degrades substantially, resulting in a darker, more lo-fi tone. While this was originally seen as a drawback that drove players towards using more clean digital delays, time has seen guitarists return to using analogue delays for their warmer, more organic tone.

It's worth noting that while they sound great, the limitations of BBD chips mean their delay time typically tops out in the 500-600ms region.

Tape emulation is simply a digital re-creation of the timbre and tone of a tape echo, where the sound is recorded to tape, and then replayed on from that tape.

As you can imagine, with a motor and variety of moving parts, these fell out of fashion due to their tendency to break, and these days most tape tones are generated by digital emulations or software plugins.

Although most multi-effects pedals will have a tape emulation these days, the quality varies wildly. For our money, the best out there are the Strymon El Capistan and Volante, with an honourable mention for the Boss DD-500.

Reverb is really a special case of delay - the sound of echoes reflecting off of surfaces in a space, like a hall or room.

Because hall or room style echo requires multiple echoes it can't really be replicated by analogue means, and though spring and plate reverbs are analogue, all reverbs that model a space are digital, which is why it's common to see most reverb pedals come with several patches, not just the one.

There's also reverse reverb, which is a special effect that flips the envelope for the reverb trails. Although not necessarily useful for ambient pads, it's very effective as a tool for constructing attention-grabbing lead lines.

If you must have the real deal, there's several options for getting your hands on a tape echo.

Although it wasn't a runaway smash-hit, T-Rex's Replicator series of cassette-based tape echoes was an incredibly innovative modern tape unit, while if you have the cash to spend on buying and maintaining vintage gear, there's still plenty of Roland Space Echoes and Echoplexes available used.

If you want a true tape echo new, then your best bet currently is Fulltone - they have a solid state and tube tape echo in their line-up.

The issues with analogue delay are multiplied with tape echoes. Undoubtedly tape echo sounds fantastic, but the trade off is not only maintenance - we have an RE-101 under the desk waiting for a service currently - but also shorter delay times.

Using delay and reverb pedals together

Not always, but most of the time, you want to stack delays so that the shorter delays are earlier in the chain, and longer delays are later.

Reverbs and modulation should probably go last, and we prefer to have our overdrive pedals before our delays and reverbs, though switching that up for artistic reasons is very satisfying.

If your reverb has a pre-delay setting, setting it to 'long' will move the reverb effect out of the way of your initial note, for better definition. Use a hall setting to create a feeling of physical space, and if the reverb has a tone control, roll it off - you want the effect to be darker, in order to create a 'bed' of reverb.

Finally, we tend to think that reverse delays sound best if they're set to short delay times and come first in your ambient chain, but like most things, there's room for experimentation and we encourage you to do so.

For this one, we've got a Boss compact delay set to a short, reverse setting - as we find it sounds different enough to the input signal when reversed that it beds in better - into a Strymon El Capistan.

In the second clip, you can hear the effect of adding a stereo reverb - the TC Hall of Fame - to the end of the chain.

In these two clips, you can hear the same signal chain used for the stacking examples, both with and without the reverb at the end of the chain. Tremolo picking with delay - and reverb - is a staple of ambient and post-rock guitar playing.

For this clip, we've used a Boss PS-5 to split our signal into two parts, although any splitter pedal or pedal with a dry out can be used for this purpose.

In the second clip, you can hear what happens when we add a stereo reverb at the end of the chain - the definition between left and right breaks down, but the feeling of ambience and space is much more pronounced.

This is too 'in your face' to be used often, but you can use it to end tracks or build dramatic crescendos. Common wisdom says that drives go before delays, but using the drive to distort and compress your delay signal is dynamic and searing. It's a common trick of players like Steven Wilson from Porcupine Tree as well, and you can hear it on some ambient passages from his solo album Insurgentes.

The first clip is delay before drive, and the second is delay and reverb - they're quite abrasive, so maybe turn your volume down a bit before listening!

Most reverbs add some degree of modulation to the effected signal, but if you want more control, you can add a modulation pedal and specifically manipulate the delayed signal.

As we mentioned, bands like Oceansize used this to great, psychedelic effect. Here, we've stuck a Chase Bliss Warped Vinyl at the end of the chain to add some movement to the guitar.

It may be simple, but that doesn't mean it isn't powerful. In this clip, you can hear the stacked delays signal chain, with reverb. Simply by swelling in the notes, a chord progression can become even more gentle, while remaining just as evocative.

Oceansize were known for mixing elements of post-rock, post-hardcore, modern metal and progressive rock. A key part of their early sound was tremolo-picked, delay-heavy guitar lines, which were then fed into modulation pedals like phasers.

Tracks like Women Who Love Men Who Love Drugs show off the arpeggiated atmospherics that characterised their early material, while Paper Champion or Drag the 'Nal/Dead Dogs An' All Sorts use volume swells and long delay times for a much more ambient vibe.

On the first Verve material - before the band became 'The' Verve and a vehicle primarily for one Richard Ashcroft - their guitarist Nick McCabe ran riot, with a room full of echo machines, modulations, and a tendency for recording disorientating parallel delayed guitar parts.

Live, you can somewhat recreate this effect via the careful use of parallel delays.

Check out first EP tracks like the extended cut of Gravity Grave, or first album tracks such as Star Sail or Butterfly for a taste. Other songs like Feel have interlocking, heavily delay and reverb-saturated guitar lines, creating a unique sound that's rarely been bettered since.

Where a lot of ambient players can get too lost in the sounds themselves, Hammock have always had a knack for finding a compelling melody in the heart of their reverb-soaked riffs, and a lot of their best guitar licks combine an almost folk slide guitar sensibility with huge amounts of ambience and no small amount of modulation.

I Can Almost See You, and The House Where We Grew Up from the Raising Your Voice... Trying to Stop an Echo LP are a good starting point.

Though he's released a number of excellent studio offerings under his moniker of Lowercase Noises, YouTuber Andy Othling's Simple Sounds in Simple Places and Terra Incognita video series were arguably his most compelling work to date.

Building up live loops into a track in the middle of the desert using battery-powered pedalboards is certainly a risky way of creating material, but the results are incredible - not only because of his expert playing but because of the spectacular backdrop.