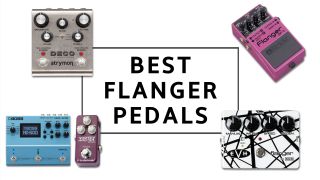 Flanger pedals aren't a subtle effect, but by the same measure, if that's the sound in your head then accept no substitutes – and this guide to the best flanger pedals can help you make the right choice. Flangers are part of a loose family of LFO-based guitar effects that also includes phaser pedals and chorus pedals.

In fact, some flangers with a vintage voicing are just about versatile enough to cover your chorus needs as well. For example, on The Police's classic 1979 hit Walking on the Moon, guitarist Andy Summers used an Electric Mistress set to a chorus-style tone, not a chorus pedal, as many assume. For arpeggiated picking, or strumming slower chords, they can add some movement to spice up a section, while for dramatic effect, when paired with a distortion pedal they can make a part literally take off.

What is the best flanger pedal?

At the budget end of the spectrum, the stand-out pedals are the Mooer E Lady and TC Electronic Vortex mini. Thanks to its toneprint technology, the Vortex is the more versatile, while for more straightforward, classic flange sounds, the E Lady is nothing if not solid. Should you have the pedalboard real estate and a few extra dollars in your pocket, however, you might do well to look at the full-size Vortex, or even Boss BF-3.

Now that the Catalinbread Zero Point has been discontinued, there's only really one player in town when it comes to tape flange emulations. If you're looking for that unique sound, and you've got pockets deep enough, then the Strymon Deco is a fantastic option.

Choosing the best flanger pedal for you

Chorus, flanger and phaser pedals are all LFO-based effects, which explains some of the confusion they can cause. The difference between them is a combination of delay line time and what the LFO is used for. On the flanger, a delay line of roughly 5-25ms, controlled by an LFO is mixed with the dry signal.

Originally, the effect was created in a much more DIY way – by running two tape machines in parallel and then putting a finger on one of the tapes to forcibly slow it down. By then recombining the two signals, you were able to achieve the distinctive flanging sound heard on Jimi Hendrix's records, for example.

Nowadays, most flangers either use digital chips to create their delay lines, but there are some that specifically aim to emulate that classic tape flange, and its distinctive character.

In terms of deciding between flangers, they have different amounts of feedback and different ranges; some even drift into chorus territory at longer delay times. Moreover, these differences result in distinctive timbres, with some more subtle and others – like the so-called 'jet' flanging tone – anything but.

Picking the best flanger pedal, then, is usually a case of checking whether there are any unique features that are on your checklist, and then moving straight on to deciding whether the voicing resonates with you.

The best flanger pedal for that old school tape cool

Rather than being a flanger pedal per se, the Strymon Deco is a tape machine emulator that does a variety of things that model the tape machines of old, from simple saturation and double-tracking to flanging.

As a result, the flange sounds on offer here are warmer, and often more subtle than any of the competing units, even those that offer 'tape flange' patches or modes. There's also a specific momentary mode that gets pretty close to the 'finger on the tape' sound of classic studio flanging.

For all the options you'll ever need

Like the Strymon Mobius, the Boss MD-500 boasts 12 modulation types and over 200 assignable presets. Unlike the Mobius, its conversion is 32-bit, not just its processing. Granted, that distinction is probably not discernible even to a studio engineer, but it does technically take this stompbox into the realms of high-end studio rack gear.

In terms of sounds, it's very flexible, with everything from the smooth Electric Mistress tone to the jet plane flange of the MXR and modern Boss units available. In practice, it sounds best when trying to emulate more modern tones, and this also plays to the strengths of its many options – stereo spread, step rate and waveform among them.

The MD-500 has a few more tricks up its sleeve too, with various rhythmic modulation options including some of the presets from oddball units like the Boss Slicer, so you've got a lot of additional inspiring sounds to choose from besides the flanger.

Mini pedals are easy to love, thanks to their small form factor and affordability – a win-win. In the case of the Vortex, the mini size means sacrificing the three-way control and excellent tape mode of the larger model, although it is still toneprint compatible, giving you access to many more presets via the toneprint software.

Perhaps the biggest drawback versus the larger Vortex is stereo capability. It's not the sort of thing you'll want to use all the time, but it can be the difference between a head-turning guitar part and something a lot more pedestrian.

If those aren't dealbreakers, however, then the Mini is a highly capable and solid-sounding flanger pedal.

Although there's a lot of controls and modes to get to grips with, the jumping-off point for the F-13 is a solid flange sound that's warm, and less 'jet-like' and aggressive at first blush than something like the Boss BF-3.

With innovative extra modes like the echo flanger, a step/pattern option and controls that allow you to 'morph' between two sets of presets, the F-13 can also get pretty weird if you need it to.

The touring option for those with massive 'boards

The Mobius has 12 modulation modes and space for 200 presets, and, although only one of those is the flanger, there are a number of sub-modes to that patch, including a classic voicing, a through-zero positive, and through-zero negative mode.

What this means in practice is there are models for the classic Electro-Harmonix Electric Mistress and MXR-117 sounds, as well as more extreme and experimental through-zero style sounds.

Although it's a large footprint for a pedal and a hefty price tag, this level of flexibility carries over to its other 11 modes, so if you want a swiss-army knife, studio-grade modulation station, then look no further.

Though a lot of people seem to view Boss pedals somewhat derisively in this bold new boutique age, the reality is that many of their designs are incredibly well-engineered and thought through, with plenty of surprises hidden beneath the surface.

The BF-3 is a prime example of this – the standard and ultra modes are much as you'd expect, but there's also two brilliant secondary modes – a momentary function, for those Ain't Talking 'Bout Love style sweeps, and a gate/pan mode, which is sort of like the classic Boss PN-2 tremolo pan pedal, except, well, also flanging.

The tonal variation offered by these unique extra modes can't be understated, and it's an incredibly inspiring pedal. Not only that, but it's also stereo, meaning you can create head-spinning effects both live and in the studio.

After various legal disputes between Electro-Harmonix and Mooer, the latter have become marginally more coy with their naming strategy. Well, slightly – meaning the ElecLady was re-branded to E Lady.

It's worth saying that for a slightly higher price, the EHX Stereo Electric Mistress is a solid option with stereo flanging, albeit in a substantially larger enclosure.

The E Lady flanger is of course inspired by the original EHX Electric Mistress, but it can also cover off a number of chorus-type sounds. The reason we're specifically recommending this is twofold – its low price, but mainly tiny form factor. There's other excellent budget flanger pedals available, but very few are as compact.

The Electric Mistress is characterised by being warm at one end of its sweep, with a glassy top. It's instantly recognisable, and reminiscent of classic prog-rock in its vibe – David Gilmour was a prolific user, so that makes sense.

Although Eddie Van Halen was perhaps better known for his use of the MXR Phase 90, for which there is also a signature EVH model, he used a flanger on several of Van Halen’s hits, such as And The Cradle Will Rock.

Compared to the Electric Mistress, it's a beefier, more in-your-face flanging sound, and particularly when paired with a distortion, abrasive and raw.

Weirdly, while issuing this more modern take on the MXR-117, the company didn't stop to make it 9V so that it could run off a normal PSU, meaning it needs a dedicated 18V PSU or compatible port.

For the Eddie fans, there's a button that instantly recalls his settings for the song Unchained. That may or may not be a selling point though – there's a fine line between homage and re-tread, after all.