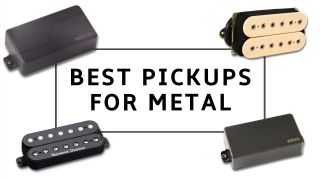 If you’re trying to realign gravity through the metallic force of your riffs or navigating long-distant galaxies on a pilgrimage of sustain, the best pickups for metal guitar-playing will only help you ring louder and prouder.

While there’s no arguing vintage-style components can still add-up to some glorious heavy tones, pickups designed for metal come packing a more modern, high-output tone straight out of the box. Swapping pickups is non-permanent and one of the most affordable ways to upgrade your guitar: get it right and you can easily transform an average-sounding plank into a colossal beast.

Naturally, each has its own merits – some aimed at tight thrashy precision, others more bright and abrasive to help cut through, and then there are pickups which cater to more organic warmth; almost as musical on the clean channel as they are with high gain. So if you’ve been thinking about a pickup change to ride the lightning or reign in blood, here are our picks for the best metal pickups on the market today…

Amazon Prime Day is just around the corner. If you're in the market for some new metal pickups, it could be worth waiting to see what the best Prime Day guitar deals deliver.

What are the best pickups for metal right now?

Our list has been compiled based on hands-on experience, and while there are many options out there, there are some definite ‘must-try’ pickups. Launched in 2014, the Fishman Fluence series has reimagined the electric guitar pickup in ways that truly thrill – offering multiple voicings and guaranteed consistency across their production. The Fishman Fluence Modern Set has become one of Fishman’s best-sellers and it’s very easy to see why. In our opinion, it’s an absolute game-changer.

There’s no pickup set as legendary among metalheads as the EMG 81/85 active pairing. Which may explain why the Fluence Moderns sound like they were designed with these in mind. Imitation is the sincerest form of flattery, after all…

Magnetic electric guitar pickups fall into two main camps: active or passive. Passive pickups are the traditional kind, fitted and usually soldered to the other components in your guitar. Active pickups, meanwhile, make use of their own preamp to give you a boosted and tone-sculpted output.

These require powering from a 9-volt battery which is housed in your guitar (although external power supplies are also available). Active pickups are popular thanks to their consistent output and tone, reducing the variables from different guitar bodies. But some players also find that active models produce a more compressed sound – not necessarily a bad thing, and really a matter of taste.

That said, the lines between active and passive have started to blur, with more passive pickups aiming to produce the heightened output, articulation and clarity of actives and certain active models aimed at players who prefer the sound of less exaggerated or scooped passive pickups. Truth be told, there’s never been this much choice in sculpting your tone – which can only be a good thing.

It’s definitely worth looking at your favorite guitarists and reading into why they swear by certain brands or which models were used on your favorite album. Anyone who has listened to bands like Slipknot, Metallica or Machine Head will already be familiar with what an active, ceramic pickup set sounds like, dialing into apocalyptic levels of punch and distortion.

Many of the bigger pickup manufacturers offer samples and demos for comparison on their websites, which is a great way to gauge which one will work best for you.

The magnet material will also play a big part in the overall tone. Alnico pickups – made with an alloy of aluminium, nickel and cobalt – are known for smoother and more organic sounds.

Ceramic magnets, however, are used for maximum output and aggression – perfectly suited to heavy metal tones, though can be less impressive on cleaner settings as a result of the harmonic saturation and compression.

Of course, there have been some truly mesmerizing metal tones recorded with single-coil pickups – just ask Yngwie Malmsteen – but most of today’s metal players swear by humbuckers, so without further ado here’s a round-up of our favorites.

The best pickups for metal you can buy today

The most revolutionary pickup since the original design…

If you’re the kind of player who wants both active and passive sounds in one set, look no further. What makes the Fluence series so innovative is how they’re made – stacking multiple layers of printed coils and interconnecting them instead of relying on the traditional method of wound copper wire coils.

As a result, each set is perfectly consistent across its dynamic and tonal range – with an alarmingly impressive accuracy and ultra fast attack response. The optional power pack is a welcome addition too – allowing the pickups to be powered via a USB-enabled back plate and saving the hassle of keeping a stock of  9-volt batteries to hand.

There are of course signature sets designed for the guitarists in Killswitch Engage, Deftones, Animals As Leaders, Lamb Of God and more – but the Moderns are a great all-rounder for your 6-, 7- or 8-string metal needs.

Invented back in 1974, this gem has stood the test of time…

It might not be marketed as an especially metal pickup, but the list of heavy players who have endorsed the JB over the years speaks volumes, from Tool axeman Adam Jones, Alice In Chains singer/guitarist Jerry Cantrell and thrash pioneers Megadeth.

What makes the JB such an enduring favorite is perhaps its versatility, with better clean and blues tones compared to higher output active pickups, and still a decent amount of bite.

Often paired with the ’59 or Jazz Neck, some might say the JB is more of a rock pickup than a metal one – with nowhere near as much low-end as some of the other options in this list.

But it certainly has a way of cutting through like nothing else, which is why – almost five decades on since its invention – the JB remains a firm favorite.

Arguably the definitive sound of metal…

Famously used by metal legends like Zakk Wylde and Kerry King as their go-to bridge pickup, the EMG 81 has been the first link in the chain for some of the heaviest tones ever recorded.

Usually paired with the Alnico V-equipped 85 in the neck position, the active ceramic tones are truly jaw-dropping – with the perfect EQ scoop for razor-sharp riffing and squealing harmonics.

Perhaps the only downside to the 81 is how it sounds through a clean channel, with many finding it too sterile and compressed – especially when compared to what passive pickups can offer.

But, then again, if you’re only interested in going at full throttle and have a preference for dialling in as much gain you can muster, this EMG best-seller will handle anything you can throw at it.

Delivering on its promise of “brutality with clarity”, the Warpig is one of Bare Knuckle’s highest output humbuckers – available in Alnico V neck and bridge forms, as well as the full-throttle ceramic bridge.

While they behave a lot like active pickups, with no shortage of sustain and clarity, they’re still passive – and pack some impressive clean and blues tones.

Like all Bare Knuckle pickups, the Warpigs come with an array of optional extras – from burnt chrome and battleworn camo covers to different bobbin and pole screw colors. So if you’re looking for extreme power with more of a customized and boutique feel, this could very well be the one for you.

The original aftermarket pickup still impresses all these years on…

An old classic
Versatile
Not as powerful as others

Introduced in 1972, the Super Distortion was one of the first aftermarket pickups in production and effectively put Larry DiMarzio on the map. Thanks to its ceramic magnets, it offers around twice the power of a typical PAF-style pickup, enough to drive the input stage of any guitar amp harder – making it hugely popular among hard rock, metal and shred players. The list of famous users over the years includes Adrian Smith, Phil Collen, Paul Gilbert and Zoltan Bathory.

“I was 12 years old in 1972 when Larry created the first replacement pickup to be released onto the guitar scene with his Super Distortion model,” remembered Steve Vai on Instagram. “It rocked everybody’s world. And I was 16 when I was able to buy my first DiMarzio replacement pick up. From then on, DiMarzio pickups are virtually all I’ve used.”

A less extreme version of the popular Modern set…

While the Fishman Moderns could very well be the best pickup for metal right now, there’s a lot to be said for its Classic set – which, as you might expect, bring active clarity to more vintage-flavored tones.

The Fluence Classics also come with three voicings – carrying a chimey neck sound, a hot-rodded bridge tone and single-coils for both humbuckers into its cutting-edge design.

“Fishman pickups are the best pickups on the market as far as I’m concerned,” Steel Panther’s Satchel tells us in the promo for his Charvel Pro-Mod DK (fitted with the Classic set).

“They sound heavy metal. You could probably plug it in to your grandmother’s refrigerator and just turn the refrigerator up to 10, and it would sound like a modded Eddie Van Halen on Van Halen 1. How cool is that?!”

A more open take on active humbuckers from the metal specialists…

In 2012, EMG released a new active set that was designed for players who wanted the hard attack and fast response of powered pickups, while still retaining the warmth and musicality of passives.

For those who loved the punch of the 81/85 set but needed better cleans and more versatility – truth be told, a common complaint with the Zakk Wylde set – EMG had truly delivered the goods.

In a promotional video for EMG made on the year of their release, Judas Priest guitarist Richie Faulkner recalled how he hadn’t tried them before walking on stage and “knew within three seconds this was the open and unforgiving sound” he’d been looking for, praising their consistency and character to “speak in the right places”.

Periphery’s sound is one built on absolute precision and clarity, so it’s no wonder that guitarist Mark Holcomb’s ceramic-powered signature set deliver on those fronts.

The Seymour Duncan Alpha & Omega are available for 6-, 7- and 8-string guitars – so whether you prefer regular guitars, baritones or instruments with more than six slots in the nut, this pair will have you covered and sit among the hottest passives on the market.

While they are EQ’d to retain detail in lower tunings, they’re just as impressive in standard.