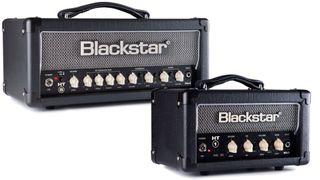 Both the HT1R-Mk II and the HT5R-Mk II are available in head and combo formats.

The considerably larger 20-watt HT20R-MkII boasts one 12AX7 preamp tube and two EL84 power amp tubes, as well as clean and overdrive channels, a USB audio out, an XLR D.I. and a studio-quality reverb. The amp is also available in head and combo formats.

For more information, head over to Blackstar Amps.