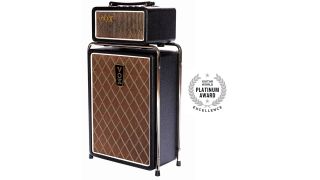 It’s well known that the Beatles appreciated the power and tone of the Vox AC30 amplifier, as it was the amp used on many of their timeless recordings and live gigs. It also wouldn’t be long before the Fab Four’s overwhelming success catapulted the band from clubs to stadiums, and those 30-watt combos were soon no match for the arena-sized screams of Beatlemaniacs. The need for more power resulted in Vox producing the 100-watt AC-100 Super DeLuxe head with a speaker enclosure (supported by a chrome trolley) for the band until that amplifier was replaced by the Super Beatle head, which was nearly identical in function and cosmetics. History lesson aside, Vox has introduced a Lilliputian recreation of that iconic Beatle amp stack with the brand-new Vox Mini Super-beetle amplifier and speaker cabinet along with its signature chrome-plated stand. What’s even better is this homage dressed as a miniature amp stack sounds just as good as it looks.

FEATURES The Vox Mini Super-beetle stands nearly two feet tall, but don’t be fooled by its diminutive stature; the amp is more than loud enough. The Superbeetle can pump out 50 watts of output at four ohms, 25 watts at eight ohms and 12.5 watts at 16 ohms. The Mini Superbeetle head is powered by analog Nutube circuitry, which employs a VFD (vacuum fluorescent display) tube that captures the same sound and response of vacuum tubes without any of the inconsistent elements. The compact head features controls for volume, bass, treble and gain, and a mini-toggle standby switch. The digital spring reverb and tremolo each have their own singular control, with the tremolo being driven by Nutube technology. On the rear panel, there’s a flat/deep EQ switch, impedance switch, ECO switch, dual speaker output jacks and a headphones/line out jack. The Mini Superbeetle’s vertical open-backed cabinet with chrome stand (and no, it doesn’t tilt) houses a single custom Celestion 10-inch speaker.

PERFORMANCE You don’t have to be a Beatles fanatic to love the Mini Superbeetle amp because it truly delivers Vox’s unmistakable sparkle and chime in a pint-sized mini stack. But if you happen to be one (like myself), you may be quite taken aback at how well the amp captures some of the tones found in classic Beatles songs. Turning up the treble gets you pretty close to “Ticket to Ride,” and cranking up the bass with some gain reveals the right amount of grind to nail “Day Tripper.” There’s not a lot of gain here but just enough grit where the amp sounds tube-like, so hi-gain metal folks will need to look elsewhere. The reverb is actually impressive by not sounding too digital, but it is plenty cavernous, so being more conservative with it won’t interfere with your overall tone. The tremolo is also very pronounced, and works well musically, depending on where you EQ the amp and not using too much gain. Personally, I find the amp to be an incredible tone machine when paired with classic guitars like Rickenbackers, Gretsch models and Stratocasters — oh look, those are guitars the Beatles used! Well, if I’m being honest, the Mini Superbeetle delivers those legendary tones and so much more, and you’d be hard pressed to find a compact amp that sounds better than this.

● The digital reverb is deep and immersive, while the NuTube-driven tremolo has a musical pulse that ranges from a slow throb to helicopter-chop. ● The Mini Superbeetle’s matching speaker cabinet comes with a custom 10-inch Celestion speaker that channels chime and Beatles-esque grind.

● THE BOTTOM LINE The Vox Mini Superbeetle combines classic looks with sweet jangly tone in a miniature amp stack that includes on-board reverb and tremolo for a striking package that will sit well onstage — or anywhere.