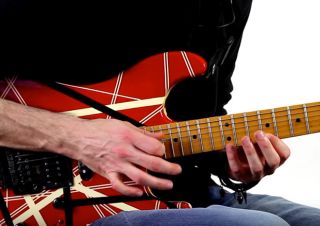 With its spectacular application of fretboard tapping, the song quickly established tapping as an essential element within a new modern vocabulary of flash licks and tricks.

The technique proved to be highly popular throughout the Eighties as a succession of innovative players applied it over a range of styles. Today, it remains firmly integrated in modern rock guitar. This month we will look at tapping licks in the styles of three of the technique’s most celebrated practitioners: Van Halen, Randy Rhoads and Reb Beach.

I advise using your second finger to tap, as this will let you hold the pick between your thumb and first finger and seamlessly integrate the technique within the more conventional areas of your playing. Rest the picking hand’s heel/thumb pad on the lower strings, using the wrist to execute the tap, and memorize each pattern slowly before applying speed.

This is the technique that shook the world in 1978. The riff begins with an a major triad (A C# E), and the change to F/A (A C F) is anticipated by the fret hand on the last note of beat two. Tap firmly, pulling off downward and slightly away from the fretboard.

This riff features a classically influenced 16th-note single-string 'full roll' lick, with an extra descending pull-off compared to FIGURE 1. it then moves from an em triad through a passing C/E in beat 4, to Cdim in bar 2, resolving to B/D#. Keep the fretting hand square.

Here we have a rapid-fire tapping lick in Em pentatonic, which leads across the strings with a tap. Use the fret-hand ring finger to hammer on, and notice the turnaround in beat four that sets up the finishing bend and wide bend vibrato.