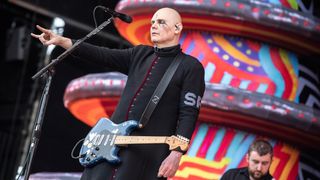 Best of 2019: Whether it’s an avant-garde signature electric guitar or how the color of a guitar changes its sound, Billy Corgan isn’t one to shy away from baring his soul - and now the Smashing Pumpkins mastermind has shared his advice for upcoming bands: playing live isn’t the answer.

In a video posted to his Facebook account, taken from his 30 Days video project, Corgan can be seen sharing his thoughts with a couple of Texas fans.

In the clip, Corgan sings deep Pumpkins cut La Dolly Vita with guitarist Jonathan Espeche, who goes on to ask how his band Empty Shells could make some traction in today’s musical climate (how’s that for some promo, Jonathan?!).

“If I was gonna give you 60 seconds of advice, I would put your whole focus into reaching people through the internet,” Corgan says.

“The cheapest thing in the world is to create media, and get other people to share it, and then get people to come to you to want XYZ.

Corgan goes on to extol the benefits of building that fanbase in terms of physical releases.

“But going out into the world and playing down the street? I would say don’t even bother.

Who says modern-day musicians have it easy? We have to be great players, video producers and PRs all at once. Yet so much of the joy of playing guitar still comes from performing live - and it remains the best way to hone your craft.

We’d say a combination of both is the best route to success - or perhaps you could give your career a boost by appearing in a video with Billy Corgan?