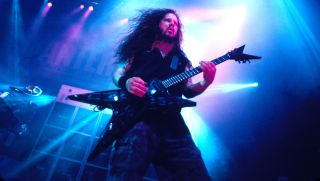 Shortly before his tragic death in 2004, Dimebag Darrell wanted to reform Pantera.

In a new interview with the Landry.audio podcast, longtime Dimebag friend Daryl “Bobby Tongs” Arnberger, who also served as a videographer for Pantera and Damageplan, said the electric guitar player told him he was going to “do whatever it takes” to reunite with singer Phil Anselmo and bassist Rex Brown and get his former band back together.

According to Arnberger, the conversation took place less than a month before Darrell was murdered onstage at the Alrosa Villa in Columbus, Ohio during a Damageplan show.

“The last time I saw him was in November of 2004,” Arnberger said. “I went over to his house. I was just talking to him briefly about everything. He was, like, 'We're gonna go out and do this tour through December, and I'll see you for Christmas and everything. After that, we're gonna have some new shit going on. And it's not gonna be this. Whatever it takes, we're gonna get these guys back together and do it right.’”

Arnberger continued, “He was saying he was gonna do everything he could. He was pretty much done with what [Damageplan] were doing at that point. He wanted to move on and go back to Pantera."

Regarding the state of Damageplan, which also included Darrell’s brother and Pantera drummer Vinnie Paul, Arnberger said: "He didn't think the other guys were as into it. He obviously didn't feel the magic as much as he did with the other two guys [Anselmo and Brown].”