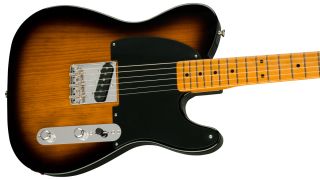 Alongside the first Road Worn Vintera models - and following last week's 60th Anniversary Jazz Bass - Fender has debuted a recreation of its first-ever solidbody electric guitar in the form of the 70th Anniversary Esquire.

Channeling the specs of the 1950 original - which was the precursor to the two-pickup Telecaster - this new incarnation features a lightweight pine body, which is roasted to increase resonance.

The guitar’s single pickup is a Tim Shaw-designed Esquire bridge single coil, inspired by an original 1950 Esquire sourced from the Songbirds Museum in Chattanooga, Tennessee.

The 70th Anniversary Esquire will be produced for 2020 only - it’s available later this month for $1,999. For more info, head over to Fender.