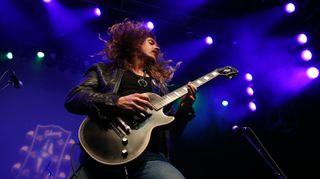 Though it may seem like this week has lasted 32 years, it is indeed Friday! Even in tumultuous times like these, we've still been looking out for the best, most innovative and groundbreaking new guitar tracks out there, and have put together an interesting playlist for your listening pleasure.

From a deeply moving pop-punk mediation on mental health to some Texas-sized metalcore that'll shake the foundations of wherever you live, this wild week really offered something for everyone.

Get a taste of what we've been listening to below.

Whether you’re into shoegaze, prog or metal, you’re likely to find something to set your guitar senses a-tingling in the latest track from one of the UK’s brightest post-rock exports, Coldbones.

Taken from new album The Cataclysm - its themes of fictional catastrophic events coming a little too close to home right now - Collapse’s tones bolster its concept, with eerie modulated delay and reverb lines, building to the single-note distorted thunder of its second half. (MAB)

Harkin - Up To Speed

Looking for your latest indie fix? You’d struggle to find a six-stringer with a better pedigree than Harkin, who cut her teeth as a touring member of Sleater-Kinney, Wild Beasts, Flock of Dimes, and Kurt Vile and Courtney Barnett.

Up To Speed is typical of Harkin’s considered approach, all crunchy ambiguous chord voicings and warbly synths, with extra ear candy courtesy of Warpaint’s Stella Mozgawa Wye Oak’s Jenn Wasner, who collaborated on the record. (MAB)

Boston Manor - On A High Ledge

Since their inception in 2013, British pop-punk upstarts Boston Manor have undergone something of a sonic sea change, and On A High Ledge showcases perhaps their most dramatic shift yet.

The track addresses the prevalence of male suicide in today’s society, and the band carry the emotional weight of the subject matter by teaming glitchy electronic drums with heavily modulated guitars and a devastating closing salvo. (MAB)

Fit For a King - Breaking the Mirror

Dallas metalcore flag-bearers Fit For a King have unveiled their latest single Breaking the Mirror and boy, does it make you want to break things - in the best of ways.

The track includes all the elements that make up great melodic metalcore: harmonized guitars, catchy, lead guitar-driven choruses, a dizzying breakdown and a truly blistering guitar solo. We expect this track to impress both festival crowds and bedroom guitarists alike. A true exhibition of the genre's very best. (SR)

Porridge Radio's brilliantly twisty new album, Every Bad, always keeps you on your toes. The Brighton, UK quartet's sophomore effort ebbs, flows, swells and subsides with the grace and power of a rock band that's totally in their element. Nowhere is that more evident than on the album's opener, Born Confused.

The song's guitars are perfectly imbued with the spirit of frontwoman Dana Margolin's immediately arresting lyrics. Snarling and bristling with jagged momentum, they lock you in from the get go, and never let up. (JM)

Jared James Nichols - Threw Me To The Wolves

Rising blues-rock star, Epiphone endorsee and Les Paul aficionado Jared James Nichols throws us latest single, Threw Me To The Wolves - a track with a simple but wildly effective main riff in which you can hear his signature pick-less playing technique at work.

After the first 2 bars, the vocals double down upon and compliment the riff, resulting in some of that perfect blues-rock synergy which is present throughout, until the beautiful feel-driven guitar solo which he presumably lays down on his signature guitar, Old Glory. (SR)