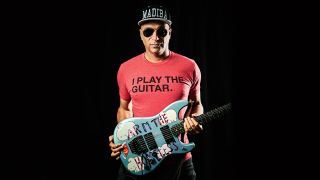 The lockdown era continues to be hard-going for many of us, but what's been most heartening is the renaissance of creativity that has blossomed in the most adverse of collaborative conditions.

Several of this week's tracks have been formulated in cross-Atlantic partnerships - hell, even David Gilmour had to change his plans - while others tackle the issue of isolation head-on.

Crucially, what all of our picks have in common is a fine array of guitar playing that spans everything from monster protest riffs (Tom Morello), haunting baritone anthems (Emma Ruth Rundle), drop-tuned metal blasts (Spiritbox) and crystalline Afrobeat jams (Fiokee).

The Rage Against the Machine guitarist joins forces with Imagine Dragons’ Dan Reynolds, The Bloody Beetroots and Shea Diamond for this timely protest anthem, inspired by a Black Lives Matter march in Morello’s hometown of Libertyville, Illinois on July 6.

Morello draws on his seemingly infinite well of riffs to unleash this two-note pentatonic behemoth, bolstered by The Bloody Beetroots’ huge electronic production, and some fierce lyrical content from Shea Diamond and Dan Reynolds.

100% of artist proceeds from Stand Up will be donated to NAACP, Know Your Rights Camp, Southern Poverty Law Center, and the Marsha P. Johnson Institute. (MAB)

Singer/songwriter Emma Ruth Rundle has stayed plenty busy during the coronavirus pandemic - teaming up with Mastodon’s Bill Kelliher and others for a spooky Kate Bush cover - and she's also dug out this unheard gem from the sessions for 2018's exemplary On Dark Horses.

Beautifully straddling the line between haunting, ghostly folk (fans of Marissa Nadler in particular will find a lot to like here) and the sort of explosive, fuzz and distortion-drenched anthems that so dominated rock radio in the early '90s, Staying Power is a song with plenty of, well… take a look at its title! (JM)

Having served as Ozzy Osbourne’s lead guitar player intermittently for over three decades, and with a name that rhymes perfectly, there’s perhaps no-one more suited to create a Black Sabbath tribute band than Zakk Wylde.

Teaming up with fellow Ozzy Osbourne bassist Rob “Blasko” Nicholson and Queens of the Stone Age drummer Joey Castillo, the group is making its recording debut with a “reverently rendered tribute” to Black Sabbath’s namesake debut.

The first track - the album’s title cut - dropped earlier this week, and our expectations have been confirmed: from the vocal processing to the guitar tones, everything is absolutely pinpoint. (SR)

This fast-rising virtuoso is a student of Ibanez signature artist Tom Quayle, and has been hailed by Guthrie Govan for his ability to deliver “technical facility and musicality in equal measure”.

SkyBluePink marks the debut single from his first-ever solo release, Escapades, and sees the Liverpudlian deliver an awe-inspiring display of idiosyncratic lead lines that more than deliver on Govan’s testimonial. There’s plenty of precision here, but a lot of heart, too. We predict big things. (MAB)

One of our 100 things guitarists should know was to keep musical and personal relationships separate. Yet Spiritbox’s husband and wife duo, Courtney LaPlante and Michael Stringer, have certainly made it work - along with bass player Bill Crook, the trio have crafted a truly unique brand of macabre metal.

Afrobeat six-stringer - and one of Africa's most in-demand session players - Fiokee teams up with Nigerian pop singers Simi and Oxlade for his latest single, Koni Koni.

If you ever wondered how to make electric guitar sit with contemporary R&B production, listen up. (SR)

David Gilmour - Yes, I Have Ghosts

The Pink Floyd icon’s first output in five years sees him pick up the nylon-string (he did sell a lot of his steel-strings, after all) for this elegant slice of melancholy folk.

Daughter Romany joins on backing vocals and harp, but it’s Gilmour’s understated lead lines that tug most vigorously at the heartstrings here. (MAB)

Founding member of Sexual Side Effects and Atlanta psych-rocker Am Taylor has emerged from a self-imposed musical hiatus with this colossal, tripped-out solo effort.

Bright Yellow Sun owes as much to desert jams as it does ’90s alternative and ’60s psychedelia, with rich overdriven tones and spacey Lydian moods that culminate in a technicolor chorus and ethereal wigouts. Suffice to say, it’s really speaking our language. (MAB)

Luke Sital-Singh has been making a name for himself as one of the UK’s most evocative singer-songwriters, and here he partners with Nashville indie-folkster Ben Cramer aka Old Sea Brigade for this wistful summer anthem.

2020, of course, hasn’t exactly had a summer to remember so far, so Summertime Low’s tense bass and yearning guitar lines perfectly encapsulate the melancholy moods of the quarantine era. That overdrive-meets-fuzz-meets-analog-delay tone of the solo two minutes in is one of our favorites of the year, too. (MAB)

Suzie Stapleton - We Are The Plague

Brighton, UK-based rocker Suzie Stapleton is far from the first artist we’ve covered in this here column to offer her take on the current state of the world, and she certainly won’t be the last.

This, however, is where the similarities between her latest single, We Are The Plague, and pretty much anything else we’ve written about lately end.

Recorded in a power-trio setup with Stapleton on guitar and vocals, Gavin Jay on bass and Jim Macauly on drums, this epic track - with Stapleton’s gothic vocals and guitar work that’s splashed liberally with noisy excursions into the unknown without ever veering too far into the weeds - is one that beautifully captures the omnipresent anxiety that accompanies our world’s many current crises. (JM)

Falling in Love is Turner’s take on So Long and Thanks for All the Shoes’ closing track, and its delicate fingerpicking and melodic electric lines make it damn-near unrecognizable from the whiplash-paced 1997 original.

As NOFX frontman Fat Mike says, “When Frank picked Falling in Love, I was so fucking stoked. Then I heard it, and I go, ‘Holy shit, he just kicked our ass.’” (MAB)