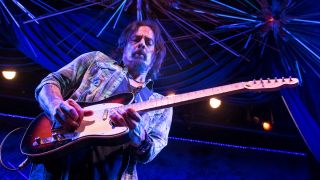 Each week at Guitar World, we're setting out to bring you a handful of fresh guitar tracks you need to hear, spread across a range of genres. What they'll all have in common is a host of six-string moments that continue to prove the guitar is very much alive and well in a wide variety of musical contexts.

Full disclosure: we're playing catch-up after the madness of NAMM and a site relaunch, so forgive us if a couple of these are from January.

This week, we've got everything from a stirring cut from Southern-rock institution Drive-By Truckers to one of shred guitar's foremost icons returning to his '80s roots - in more ways than one.

Shred’s most melodic guitarist reins in the legato (well, a bit) and harks back to his roots in the first single to be released from 17th (!) album, Shapeshifting.

Nineteen Eighty delivers a refrain that’s more than a little reminiscent of Satch’s landmark Surfing with the Alien release, but supercharges the Dick Dale vibe with fat Marshall tones, harmonized pick tapping and even a little Phase 90, all of which bodes well for Shapeshifting’s release on 10 April. (MAB)

Marking the upcoming release of their self-titled and first studio album in five years, Lamb of God have unveiled Checkmate, a politically charged groove-metal onslaught which reminds us of their revered position within the genre. The track kicks off with an impressive solo line courtesy of lead guitarist Mark Morton over a primitive version of the brutal Pantera-esque main riff to come.

Replacing Chris Adler, new drummer Art Cruz smashes his first recorded track with the band, adeptly laying down technical beats that bolster the face-melting guitar work, reassuring us that Lamb of God are back, and as mighty as ever. (SR)

The virtuoso’s virtuoso has always been prolific, but even Kotzen’s most ardent fans must have been a little surprised by his plans to release a 50-track album for his 50th birthday on February 3.

Devil’s Hand is our first taste - it possesses an undeniable AOR vibe and accompanying journeyman music video, but it’s Kotzen’s playing that sends this song far and above anything his contemporaries could muster.

From the deft use of a Strat whammy to wring more emotion out of the middle eight solo to the George Benson-on-steroids outro sing-scat leads, this is likely to be among the best playing you’ll hear this year. (MAB)

Brandon Boyd and co have had numerous flirtations with straight-up pop since their nu-metal heyday, but Our Love is perhaps their most successful yet.

Mike Einziger’s knack for writing infectious guitar parts shows no sign of abating (after all, this was the guy who practically soundtracked 2013 with his six-string bro-down in Avicii’s Wake Me Up), and his latter-day Tele-meets-Mesa tone has never sounded better. We have absolutely zero qualms about him sending the track to bed with a reverb-heavy wigout, too. (MAB)

This five-piece is at the helm of British metalcore, and rightly so. Following the release of their acclaimed 2018 album Black Flame, Bury Tomorrow have released Cannibal, the lead single and title track from their upcoming sixth studio album.

For metalcore players, the track features everything you’d hope for and more: a creative tapping intro/chorus line, a verse riff that pounds in perfect unison with the kick drum, and a middle-eight that takes the opening line down an octave and adds new motifs. This track is a showcase in fretboard mastery, and if it’s an indication of what to expect from the rest of the album, we're very excited indeed. (SR)

Patterson Hood has more than earned his place as Drive-By Truckers' public face and conscience (how many rock stars do you know have written New York Times op-eds on politically charged topics?), but Mike Cooley is in every way his equal - in songwriting and guitar playing.

Cooley's Slow Ride Argument is a salve on the band's viscerally political new album - and for a world where horror reigns everywhere you look - a stately, authoritative post-breakup meditation with the propulsion of the best road-trip rockers.

Of course, the song is given its momentum by DBT's speciality, that comforting wall of gritty riffing - dense and humid, like the summer air of the South they so perfectly encapsulate in their music. (JM)

The Brian Eno-championed, Jeff Buckley-channelling British Tele wielder has brought compositions from her third album Hunter into stark clarity with Hunted, a series of collaborations that reimagines Calvi’s first recordings for that album with input from the likes of IDLES’ Joe Talbot, Charlotte Gainsbourg and Julia Holter.