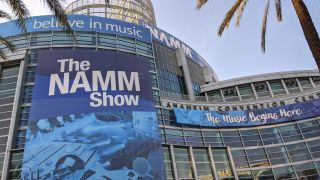 NAMM 2020: Once more, we’ve arrived at that most wonderful of year… for gear. Yes, the NAMM show is here, and whatever you’re into, you’d best start hoarding that dollar, because there are going to be some red-hot guitar releases - and we’re with you every step of the way with the latest NAMM 2020 news.

Yes, the NAMM news is currently in full flow, with many of the year's major releases already announced from the industry's biggest players, including Fender, Gibson, PRS, Martin and more.

Behold, your year in gear...

NAMM guitar news, rumors and predictions: everything we know so far

- All eyes are on Fender this year, after CEO Andy Mooney’s announcement that the company will introduce more signature guitars for female artists next year than in its entire 70-year history. Oh, and there will also be a new Jim Root Jazzmaster, as confirmed by Mooney, as well as a Joe Bonamassa '51 Nocaster, which replicates the blues guitarist's "best" guitar. That, of course, is in addition to its new range for 2020, the top-spec American Ultra Series, which was unveiled in November. The Big F's Custom Shop offerings are out and about, and boy, are they something - most notable the $560,000 Coronation Stratocaster. And that's not to mention the Custom Shop's tripped-out replica of George Harrison’s ‘Rocky’ Stratocaster. Fender has also doubled down on the success of last years Acoustasonic Telecaster with the Acoustasonic Stratocaster.

- 2020 is off with a bang for Gibson, as it launches the Slash Collection of Les Pauls and acoustics. Elsewhere, we can expect more historical replicas courtesy of the newly established Murphy Lab. More excitingly, both Adam Jones and Tony Iommi will be debuting new signature models. And, hang on: has Phil X joined Gibson? Also, the guitar giant has announced new Flying V, Explorer and Les Paul Special Tribute models.

- Charvel has nailed 2020 - as it did with 2019, to be honest - with fresh signature models for Joe Duplantier, Angel Vivaldi and Satchel, and a host of really very-impressive-for-the-money Pro-Mod models.

- Ibanez has already had a storming 2020, dropping impressively spec’d new AZ and RG electric stunners. It has also unveiled a spectacular new Steve Vai signature model - and it's not a JEM...

- There's huge news from Fano, as it brings its gorgeous reimagined guitar styles to a sub-$999 price point with the new Omnis Series.

- We're saying hello to Supro's take on Bigsby-equipped semi-hollows with the dazzling Conquistador and Clermont.

- Vox is back in the guitar game, with the launch of two new Bobcat semi-hollows.

- On the Epiphone side, KISS guitarist Tommy Thayer has landed himself a new version of his signature Les Paul, now kitted out in an Electric Blue finish.

- PRS has already dropped a motherlode of new gear, revealing six new SE guitars, some sweet updates to the John Mayer Silver Sky, plus fresh Mark Holcomb and Dustie Waring signature models and, most excitingly thus far, the arrival of the McCarty 594 to its keenly priced S2 Series. It’s the company’s 35th anniversary, and the company has released the Private Stock Dragon, a fire-breathing beauty of an instrument.

- Reverend is back in town and ushering in the new year with the sleek Roundhouse, tricked-out Contender and updated Warhawk, not to mention a signature model for Nine Inch Nails' Robin Finck.

- As always, Cort is promising a big haul, headlined by the sand-blasted KX300 Etched.

- ESP got the jump on the show with its usual pre-NAMM preview, which showcases the return of the Phoenix, hardtail Black Metal models and a wealth of tasty fade finishes, as well as sand-blasted models and some affordable new Eclipses, plus the new LTD '87 Series and more updates to Signature and Deluxe Series.

- Schecter's first 2020 offerings are out in the wild: the all-new Silver Mountain and all-new PT Pro - and there's plenty more to come...

- It's all go at Godin, with the launch of the Metropolis Classic QIT and Seagull S6 Classic Black acoustics, plus the reissued Radiator.

- This could be the time for Brian May Guitars to launch its first non-Red Special, the Arielle signature model.- One of the more intriguing electric guitars to be announced is Relish's affordable-ish new Trinity solidbody, which lets you swap out pickups in seconds, apparently.

- Dean has launched a new model in its Select Series - the Cadi Quilt Top Floyd in Ocean Burst - with fittingly metal specs.

- So far, Vox has unveiled its latest affordable modeling amp, the Nutube-equipped Cambridge50, transformed the Mini Superbeetle into a Bluetooth speaker, and even launched a pair of smart noise-canceling headphones for guitarists.

- Boss has launched the game-changing Waza-Air, which crams an entire amp into a set of headphones.

- Boss has given its flagship 100-watt combo, the Katana-Artist, the MkII treatment, with a number of new effects, tones and features.

- Freyette has come out swinging with an updated line of Deliverance amps.

- Revv Amps is rev'd up with the high-gain, Two Notes-loaded G20 lunchbox head.

- Ashdown Engineering has unveiled The Ant and The Newt, two ultra lightweight and compact amps for bass and guitar, respectively.

- MXR has launched its own mini-pedal version of Paul Cochrane's revered Timmy overdrive.

- Maxon and Tube Screamer creator Susumu Tamura have created the Apex 808, potentially the best-sounding Tube Screamer ever made.

-Vox has finally brought Nutube to its own pedal line, the four-strong Valvenergy series.

- We’re not sure what else Boss will have left to announce at the show; it’s already announced the DD-3T and DD-8 digital delays, the all-powerful SY-1000 synth pedal, and the game-changing Waza-Air, which crams an entire amp into a set of headphones.

- Danelectro pedals are very much back for 2020, launching the 3699 Fuzz, Back Talk Reverse Delay and Roebuck Distortion.

- Electro-Harmonix has debuted the EHX-2020, a $39 mini pedal tuner, but we've already caught wind of some pretty special, outside-the-box releases from the NYC co…

- JHS has been working with Paul Gilbert on a signature overdrive pedal, and all signs point towards its unveiling at the show.

- TC Electronic has only just launched its Flashback 2 and Hall Of Fame 2 Mini pedals, but we do know there’s likely to be an all-encompassing multi-effects pedal dropping very soon...

- As well as the nicely priced GE250, Mooer will be giving players what they want this year. That’s all we’re saying for now...

- FoxGear has offered up two intriguing new takes on multi-effects with the Anubi Ambient and Modulation.

- LR Baggs has announced the Soundscape, an impulse response pedal built to recreate a more accurate acoustic guitar image than ever before.

- Korg has dropped a super-easy-to-build pedal kit - with no soldering required.

- Vox has announced the V847-C - the perfect modern Vox wah?

- Mooer has dropped two new feature-packed mini pedals, the A7 and D7.

- Ibanez has buffed up its AEG and Artwood Series acoustics at some very enticing price points.

- Orange has waded into the acoustic-amp arena with the Crush Acoustic 30.

- For 2020, Martin's monster acoustic launch supersizes the X2 Series and debuts the positively rococo D-42 Purple Martin - but we hear that won’t be the only head-turning instruments on display come NAMM time...

- D'Angelico has refreshed its Premier Acoustic line-up for 2020. For now, we'll have to wait and see what the electric ranges hold.

- So far, Orange has been focusing on the low-end with the Little Bass Thing and Bass Butler.

- Looking to lighten your bass rig? Darkglass has the answer, with the DN series of lightweight bass cabs.

- Ashdown has dropped a unique new line of bass guitars.

- Seymour Duncan is promising Filter’Tron tones from your humbucker-equipped guitar with its new Psyclone pickups, while there's plenty more in store...

- EMG is teaming up with some big names for 2020, unveiling new Jim Root and Robert Trujillo signature sets, plus an update on an old favorite.

- Although AmpliTube Joe Satriani won’t quite be ready for NAMM, IK Multimedia will reveal the voting results for the gear that will be included in the collection on day 1 of the show.

- Utility Design has released the rather useful Vidami video looper pedal, to make your guitar learning that little bit easier.