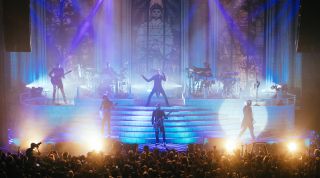 Dubbed "The Ultimate Tour Named Death," the month-and-a-half long trek will take the group across the continent from mid-September through late October. You can check out the group's full itinerary below.

San Antonio rockers Nothing More will provide support for the tour, while tickets go on sale to the general public this Friday, April 5 at 10AM local.

For tickets and more info, head on over to ghost-official.com.

* Nothing More will not appear on this date