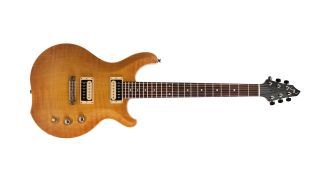 The Aventine Standard features a uniquely shaped body consisting of a hand-carved flamed maple top and mahogany body - each with an eye-catching burst finish.

The guitar can be ordered with numerous spec variations, including the option to opt for either a set-neck or a bolt-on neck. The neck itself for each variant remains the same - a 22-fret, 25" mahogany C-shaped design with a rosewood fingerboard and pearl dot inlays.

Other features include 18/1 Hipshot open back tuners and Sheptone Red Headed Stepchild humbucking pickups. Its tonal configuration circuit consists of master volume, master tone and a 3-way toggle switch. There's also a push-pull coil split on the tone control, and a treble bleed on the volume.

You'll need the princely sum of between $2,700 and $2,900 to afford one of these beauties. For more information, head to John Wallace Custom Guitars.