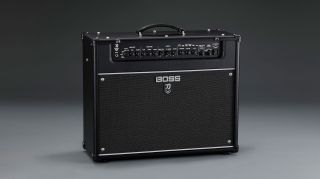 NAMM 2020: Back in October, Boss updated its incredibly acclaimed (and commercially successful) Katana series of amplifiers, gracing its 50W, 100W and 100W 2x12 combos, and 100W head with a boatload of new features and more tonal versatility.

Now, that series' flagship model - the Katana-Artist - has been given the same MkII treatment, with more tonal options and effects, plus some nifty hardware updates.

Like its predecessor, the Katana-Artist MkII packs a 100-watt Waza 12-inch speaker designed to produce heavy, 'brown sound' tones inspired by the British stack speakers of the '60s.

While its predecessor had three effects categories, the Katana-Artist MkII features five. The MkII's five amp characters have also been given a number of newly voiced variations, bringing the amp's total of tone options to 10.

In the controls department, a three-way Contour switch shapes the core tone, while three selectable Global EQ settings allow guitarists to adjust their sound for different styles and instruments. There's also a dedicated panel knob for a solo boost function.

If they so choose, users can also now harness the power of two Katana-Artist MkII amps together. Each amp can be configured with independent settings and then operated from a single GA-FC foot controller.

The Boss Katana-Artist MkII will be available in February for $599.99. Be sure to stop by Boss for more info.