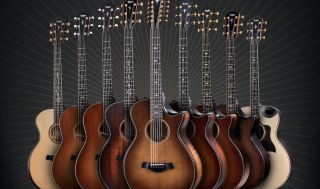 NAMM 2020: “We have a long tradition of making guitars feel good - I wanted to take that idea and start applying it to the rest of the guitar,” said Taylor’s Master Designer, Andy Powers, when the Builder’s Edition collection was initially launched in 2018.

Two years on and the premium range is looking bigger and better than ever, with four new models joining the line that was originally created to “establish a new standard of sound and feel for the acoustic guitar."

The combination of a soundport cutaway (a scoop in the treble-side shoulder that houses an off-axis soundport) and V-Class bracing produces a rich, high-fidelity voice that will be sure to dazzle.

If Greta Thunberg was on the hunt for a new acoustic, she would almost certainly approve of the Builder’s Edition 324ce, which pairs Taylor’s knack for high-performance instruments with its commitment to environmental responsibility, using back and sides made of Urban Ash sourced from trees that required removal from municipal areas.

Together with a mahogany top, Curve Wing bridge, Gotoh tuners and V-Class bracing – it matches high-quality tone with a more sustainable, minimal carbon footprint. A win-win, in our view.

Also making its debut is the Builder’s Edition 912ce, which Taylor said is designed as “a high-end acoustic for electric players” – putting playability right up there with tone in its functionality.

Fans of 12-strings will be pleased to see the inclusion of a 12-string Builder’s Edition 652ce, which pairs figured Big Leaf maple with torrefied Sitka spruce in a compact Grand Concert Body.

The acoustic will feature a beveled cutaway and armrest, double-mounted string anchoring, sleek contouring and will be reverse-strung like some 12-string electrics in order to create a richer and fuller sound that remains clean and articulate.