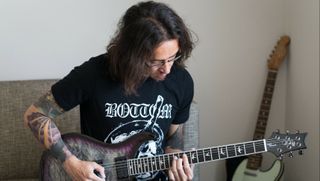 Periphery’s Mark Holcomb is auctioning one of his touring PRS signature electric guitars, with 100 percent of the proceeds going to charity.

The axe in question is a 2019 PRS SE Mark Holcomb, and it was one of his main six-strings during Periphery's Hail Stan touring cycle.

According to Holcomb, the instrument, which sports a multi-color finish, “doesn't have much wear and tear on it (which is nothing short of a minor miracle),” and features an added Hipshot volume knob, locking tuners and a Seymour Duncan Alpha/Omega pickup set, his “favorite pickups on the planet.”

Holcomb also signed the backplate, but says he will include an unsigned plate if the buyer prefers.

Additionally, he’s throwing in a host of goodies, including custom Dunlop Periphery picks, a Planet Waves leather strap, D'Addario NYXL strings, a Periphery shirt of the buyer’s choice, a tour laminate, a PRS gig bag and “whatever other Periphery/PRS memorabilia I come across in my house and studio.”

The guitar is currently up for auction for $3,500, with bidding ending on August 26. Half the profits will be donated to Feeding America, and the other half to the Living the Dream Foundation.

Adds Holcomb, “Both sites accept donations, so if you don't plan on bidding for the guitar, feel free to consider donating directly to either. Every little bit of help counts, even the tiniest donation.

To check out the guitar, head to eBay.