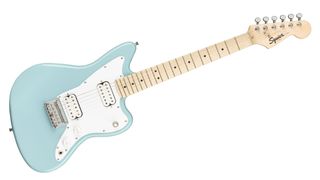 As we posited last year, the offset has finally gone mainstream, and Fender has reinforced our position this year, not only with a Jazzmaster ukulele, but also a beginner-friendly version, in the form of the newly launched Squier Mini Jazzmaster HH.

The ever-so-cute Mini Jazzmaster gets its name from its reduced size - Fender promises a thin and lightweight body - and very short scale length (just 22.75”, as opposed to the fully grown version’s 25.5”).

Other departures from traditional spec include a hardtail bridge and a pair of Squier humbuckers, controlled via volume and tone controls, as well as a three-way pickup selector.

You’ll also note the C-shaped maple neck has 20 frets, while the body is made from poplar - the same wood used in Squier’s recently announced Paranormal Series.

The Mini Jazzmaster joins the Mini Stratocaster in The Big F’s downsized line-up, and clocks in at $179.

For more info, head over to Fender.