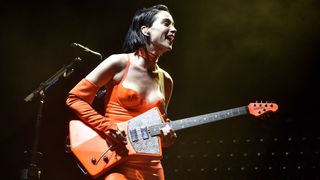 Maybe it’s because St. Vincent’s electric guitar playing leans towards the unconventional, but any time Annie Clark covers a classic rock song, the internet goes mad. We saw it before with Little Wing and Dancing Days, and now Clark has uploaded footage of herself playing another classic Zeppelin song - Stairway to Heaven.

“Since guitar stores have been closed, I thought you might have missed the sound of someone fumbling through Stairway to Heaven,” Clark says on Instagram, as she launches into Jimmy Page’s iconic fingerpicked intro on her Ernie Ball Music Man signature model.

Clark points out that there were a number of other contenders for the clip.

“Not pictured but honorable mention - Smoke on the Water, Sweet Home Alabama, Black Dog, Wherever I May Roam,” she says.

“Love to all my guitar players out there. I know. I miss it too.”

As do we. Strangely enough, lockdown appears to have lifted Stairway’s ‘off-limits’ restrictions, as we’ve seen a number of guitarists tackle the Led Zep classic, including Misha Mansoor and, of all people, Adam Sandler.