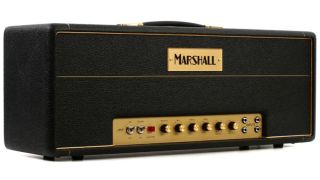 In the market for classic Plexi tone? Then head on over to Sweetwater, where the company has unveiled an exclusive run of Marshall 1959HW "Final Curtain" Limited Edition 100-watt guitar amp heads.

The drool-worthy, hand-wired, all-tube amp, which replicates the sound of the legendary Marshall 1959 'Plexi', is being offered in an extremely small batch of just eight units.

Like the original Plexis, the 1959HW sports two non-footswitchable channels, each with high- and low-sensitivity inputs.

Both panels are made of gold Perspex, and the amp’s hot looks are capped off with a classic black Marshall logo.

The Marshall 1959HW 'Final Curtain' Limited Edition is being offered for $3,599.99. For more information or to pick one up, make your way over to Sweetwater.