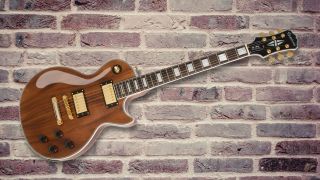 If it weren’t for the headstock, you could easily be fooled into thinking this Les Paul electric guitar was pieced together at Gibson’s Nashville custom shop rather than the Epiphone factory in Qingdao, China.

This particular model boasts figured koa instead of maple on top of the mahogany body – which is what makes its natural finish oozes elegance and class, finished off with gold hardware, Premium Grover tuners and multilayer binding.

The Graph Tech Nubone nut is a vast improvement on what you’ll find fitted on most Epiphone singlecuts, offering an enhanced tuning stability that helps it behave more like an American instrument when tackling those big bends and wide vibrato leads.

While the slightly overwound ProBucker pickups are voiced like the classic PAF humbucker sound Gibson are renowned for, they also offer coil tapping and phase selection for absolute tonal control. Which means you can go from funk to jazz or Hetfield to Hendrix – as well as the more nasal Peter Green-style sounds in between – without much fuss at all.

Bearing in mind that the most affordable Gibson-branded/American-made models, the Tribute series, retail at roughly twice this deal price, with less features and more minimalist aesthetics – here’s a Custom that really does feel like a steal.

Epiphone Les Paul Custom Pro Koa: price dropped to $529
Easily one of the most versatile guitars ever to bear the Les Paul logo, available in a mouth-wateringly rare natural finish.View Deal

Thinking about waiting for a few more weeks to bag a great Black Friday guitar deal? We'll be sharing all the best offers on Guitar World, including from our Sweetwater Black Friday deals hub.